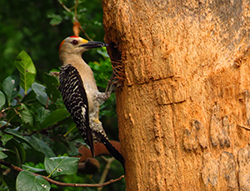 In this time of rebuilding America and the World, Woody Woodpecker demonstrates the importance of sharing your most important skill with others. This week is the anniversary of the cartoon character, Woody Woodpecker, created by cartoonist Walter Benjamin Lantz in 1941. He used one of the largest woodpecker species as his model, the Pileated Woodpecker at 19” long with a flaming red crest, long bill and loud call. 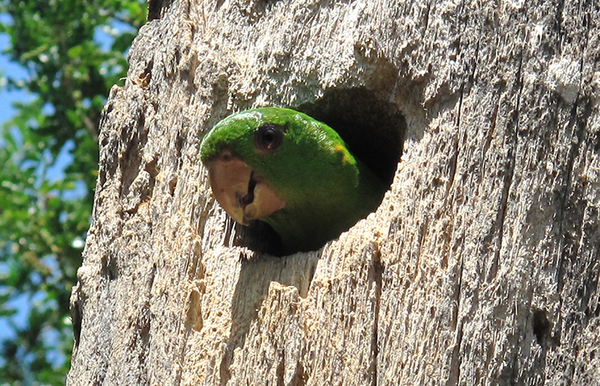 There are more than 180 species of woodpeckers worldwide. In the Rio Grande Valley, our most famous is the Golden-fronted Woodpecker. This zebra-backed woodpecker is about 10” long and works diligently to create nest holes in dead palm trees. A pair working together may take two weeks to create their nest to incubate from 4 to 7 eggs. They create about a 2” hole, dig straight back and down to create a soft bed for their young. Did you know a woodpecker can peck 20 times in one second? Now that’s a drummer!

In addition to providing cavity nests for their young, when abandoned, the holes are used by other birds. About half of all birds are cavity nesters, such as owls, chickadees and parrots. The eggs of cavity nesters are more spherical than other birds, as they do not have to worry about them rolling away. Woodpeckers are the primary excavators of nest holes, and are extremely important to ecosystems for their excavation skills.
In addition to using their special skill in excavating nests, their bill is also used to look for food. They have tongues up to 4“ long with barbs and bristles to help extract insects from holes in trees. 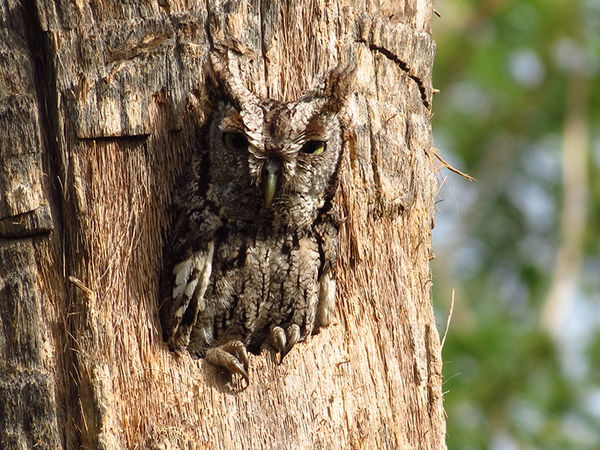 The final way woodpeckers use their bill is to communicate with other birds. They will drum, or tap on trees, to communicate different things, to attract a mate or as a warning to others to stay away from their territory.
Remember, dead or dying trees are important for woodpeckers and many species of wildlife as shelter, so it is important to leave dead trees to serve as wildlife habitat. Enjoy birding with your family. Follow Quinta Mazatlán on Facebook, Twitter, Instagram, and Youtube @QuintaMazatlan to learn more about our natural heritage in the Rio Grande Valley of South Texas.

PHOTO CAPTIONS:
1. At Quinta Mazatlan, we thank the Golden-fronted Woodpecker for creating homes!
2. An Eastern Screech Owl in a nest hole made by a woodpecker at Quinta Mazatlán.
3. Over half of all birds are cavity nesters, including parrots and parakeets.