The phenomenon of Chef Arevalo 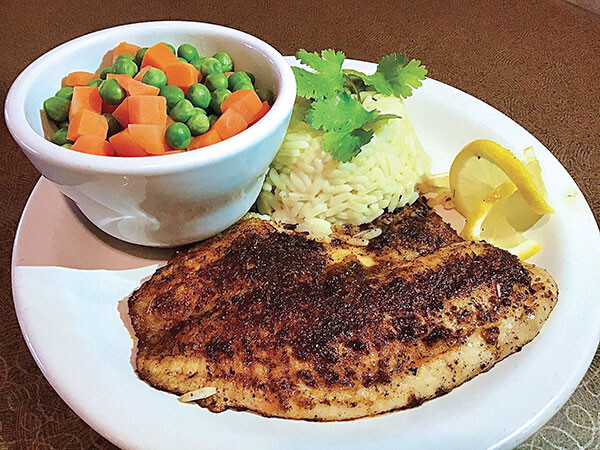 I have noticed this strange phenomenon.

Whenever Victoria Palms’ Chef Marcus Arevalo cooks up something for you to eat, it is going to be absolutely terrific.

Such was the case once again as I visited the restaurant with no idea of what I wanted. The chef came out to say hello and I asked him for his opinion to help cure my clueless dilemma. His first recommendation was the blackened tilapia, followed by the fried whitefish.

Being hungry, as always, I chose both.

My server, Elizabeth Andrade chimed in after she asked what I ordered and said she especially loved the blackened tilapia, an encouraging preview of what was to come.

The tilapia arrived and before even a bite was taken, it looked and smelled absolutely mouth-watering. The fish, with the mixed spices, came out blackened as advertised and the spices on top glistened, giving amazing contrast to the snow-like whiteness of the fish.

I have been playing a little in recent weeks with blackening food and found how easy it is – for me at least – to end up with a product that is over blackened, the power of the pepper dominating the flavor. This was not the case with this tilapia as Chef Marcus created an amazing piece of fish, the blackened flavor deliciously combining with a fish that was cooked perfectly, flaky yet firm and not rubbery. A stunning combination of flavors. Elizabeth was spot on when she promoted this dish.

The fried whitefish was another dish that tickled the taste buds. The first bite brought about two distinct flavors and an interesting mixture of the crunchy outer layer of breadcrumbs and other seasonings, and the delicate inner fish. There were also two distinct flavors – from the batter and the fish -- and, my favorite part, is that it was probably 85% fish and 15% batter, unlike so many places that seem to flip-flop those percentages, making you search for a glimpse of the fish.

Now, I am a sauce guy. I enjoy salsas and tartar sauce, ketchup, and soy. The list goes on. I was really into the hot pepper challenges and fell in love when chipotle became a trend. So, I asked for some tartar to go with the fried fish plate, thinking I would need something to offset the dryness of the batter.

I think I used a third what I was given, a shock to me. The fish did not need it, so I just used it in little dabs to accentuate the dish. Then it dawned on me – a revelation – when the fried fish is not all batter and is mainly fish, there is no super dryness to contend with.

It was yet another five-star victory for Chef Marcus. I cannot wait to go back to Victoria Palms Restaurant, hungry and without a clue… as usual. I know I will be in good hands.