It’s not just any omelet 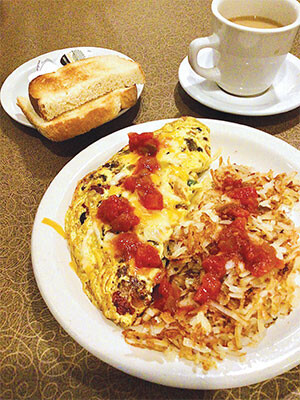 The great ones are known by just one name.

Well, it’s more like Omelet Dave after making more than 100,000 omelets during his first 13 years at the Victoria Palms restaurant in Donna. So, maybe he doesn’t have the worldwide appeal as Woods or Jordan, but he’s known among Winter Texans, and travelers who stop in for one of his fantastic creations - whether it’s an omelet or a tantalizing waffle masterpiece

Dave’s gift for gab is as great as his cooking. There’s no charge for a good conversation with Dave. In fact, it's highly encouraged.

This morning, I had an omelet with the works - bacon, ham, sausage, green peppers, jalapenos, onions and, of course, mushrooms – but no spinach (don't want anyone to think I'm super healthy). As usual, it was a perfect way to start the morning. It came with hash browns, sourdough toast and salsa (and a cup of coffee). Not sure why, but I can make an omelet with the exact same ingredients, put a chef’s hat on - probably even Dave’s hat, and cook it all in the same spot Dave cooks it and it just won’t be as good. Why is that? 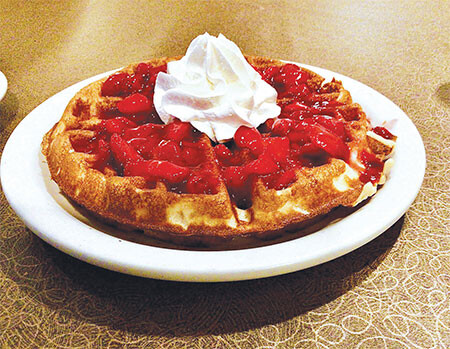 I also had a round two. A waffle that doubled as dessert - that’s how I justify it. This tasty morsel was put in front of me to the chorus of angels. It had to be the fluffiest and tastiest waffle I’ve had in recent memory. The waffle was as smooth as the mound of strawberries and whipped cream on top. Chewing is just an option.

It was a perfect complement to go with the working man’s omelet.

Dave said he figured that he would be 84 years old about the time he reaches 200,000 omelets and said he would probably still be doing it if he is still able.

That’s great news for Victoria Palms. It’s also terrific for all those who go by the RV Park, hotel, and restaurant, which is open to the public.

The food is definitely worth the trip. Being part of the great Omelet Dave experience is just an added bonus - at no additional cost.