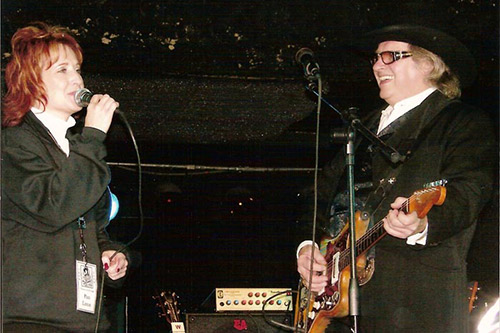 Get ready for a 60 to 90 minute Country and Popular Music show packed full of your favorite classic songs. Amazing vocal harmonies and touching duets are accented by humor & stories. We tell the truth.... it's funnier than anything we can make up! Audiences are amazed by Sherwin's ability to bring back the image and sound of Johnny Cash. Dick Moebakken's affable personality adds to his great impression of "Grandpa McCoy" and Dick's vocal likeness to Freddy Fender is a show stopper.

Pam Linton's powerful vocals really shine when she performs her special tribute to Country Music's First Lady Tammy Wynette. She sings sweet folk and gospel songs, and then really makes the gears grind with Hot Rod Lincoln. The Rockin' music of the 50's also comes alive with the songs of Elvis, Chuck Berry and a tribute to Buddy Holly. Our two latest CDs "Hillbilly Heaven" and "Highway Headin' South" have garnered 8 First Ballot Grammy Nominations. The show closes with a patriotic tribute to America, our Veterans and the armed forces. This three piece group has a vast repertoire of routines and so much material to draw from, the show is ever changing and audiences are always coming back for more!