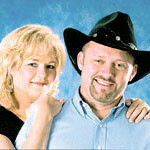 With over a quarter century of success in the entertainment industry, Gordy and Debbie Kaye Wensel bring their Branson show to South Texas during Winter Texan season.  The show is an upbeat variety show that is a mixture of country, music from the 50’s and 60’s, gospel and patriotic music combined with comedy and suitable for all audiences.

Debbie studied music education in college but decided she would rather sing than teach. She moved to Clear Lake, Iowa and formed The Debbie Kaye Band. She moved to Branson in 1994.

Gordy Wensel started his singing career in church in Cedar Rapids, Iowa at the age of 13.  A great fan of George Strait, he sings many of Strait’s songs. After placing second in Doug Gabriel’s Branson Idol competition, he moved to Branson in 2005, where he met Debbie Kaye. Within a year the couple married and have now become one of the most popular husband-wife duo’s entertaining in the Valley.