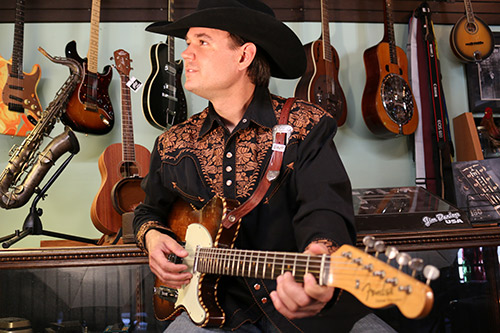 Rusty Rierson is a native of Leon, KS. He has been entertaining audiences for 23 years although this is his first full season in the RGV. Growing up on the family farm he fell in love with agriculture and pursued the degree at Kansas State in Agricultural Economics. Rusty graduated in 2008 and then completed a masters degree in Animal Science from K-State as well in summer 2011. Rusty got into music when his father, Roger, suggested that they take lessons together. In 2005, Rierson won the state wide "YF&R talent find contest" hosted by Farm Bureau and performed at the Kansas State fair where he is annually invited back. In 2007 Rusty won the "Colgate Country Showdown" at the state level and placed in the top 15 nationally. He competed again at state in 2008, 2010, and 2011, before signing with his first Nashville record label.

Rierson always plays tribute to George Strait, Don Williams, and some of his other heroes, as well as his own music. Rierson says he hopes people will see his music as "a breath of fresh air". Rusty has produced 8 albums and 1 DVD. There are now more than 100,000 copies of his albums in print.

In 2012, Rusty released his single "Souvenirs", a project recorded in Nashville with producer Richie Owens. The song briefly charted on the Music Row Breakout Chart in the U.S. but went Number 1 for 4 straight weeks on Europe's Country Music Chart, and held off country superstar Toby Keith to the 2nd position the whole time. Rusty charted a few other singles in following years: “Hey Hey Hello”, “Something Bout You”, "Upon This Rock", "That's How Sure I Am", and "Life's Too Short". In addition, he has released multiple Christmas singles to radio over the past few years including most recently his first duet release, a song with Kaylee Keller of Garden City, KS.