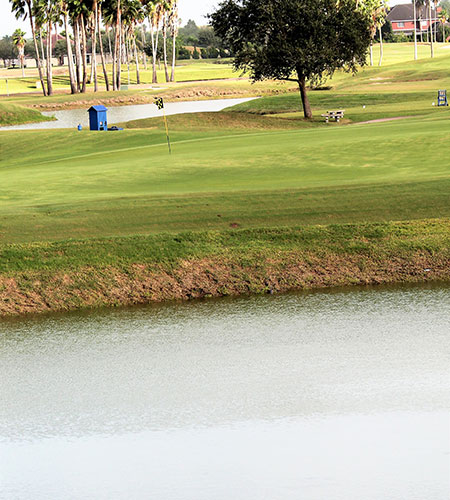 For several years we have gotten Winter Texans’ input on the Valley top golf course and favorite holes at the golf courses in the Rio Grande Valley. This year we are starting a little early with our series that introduces some hidden gems at the more popular Valley golf courses.

We will be running a three-part series introducing these hidden gems in three categories – lower, middle and upper Valley. These hidden gems are recommended by the golf pros, or regulars, at the golf courses.

In turn, we would like to hear from you during the series. We will have a survey on our website, www.wintertexantimes.com, for you to vote on your favorite hole. We will be taking votes until November 13.
We will announce winners in an article on November 20.

Similarly, golf courses have some hidden gems of their own. Sure, they have their “signature holes,” usually the most difficult, most scenic or most unique (most of the times all three) hole on the course.

But hidden away are those other holes that bring a smile to a golfer’s face (sometimes dread) but, just like a mystery writer who throws twists and turns throughout their novels, golf courses do the same. Three of the courses in the Mid-Valley that often appear on top of Winter Texans’ favorite places to play are no different.

This course is loaded with gems. Everyone knows about what many consider the favorite closing hole in the Valley, the long par-4 that leaves most golfers with a decision on how to approach with water across most of the front.

Go for it? Or be safe and hit left, where a chip to the green awaits.

But everyone remembers No. 18 at Tierra Santa. Still, other holes await.

No. 3 is a gem of a gem. The par-4 starts the golfer off with a split fairway. Go the direct route and you have to fly the left-side lake, which means carrying your drive 190 yards and straight. Go slightly right and you may end up in the right-side lake. There are big rewards hitting a perfect drive, setting up for a short or mid-range pitch and run to the hole on the large green.

For the golfer who goes right, there’s plenty of open fairway. Slice the drive, however, and there’s a long approach over water and, if the pins are on that side of the green, you better “stick it.”

“It can be a pretty tough hole – it’s definitely made for golfers to think about it,” said the pro shop’s Dylan Martinez, who said he would play the course often when he was on the golf team at Harlingen High. 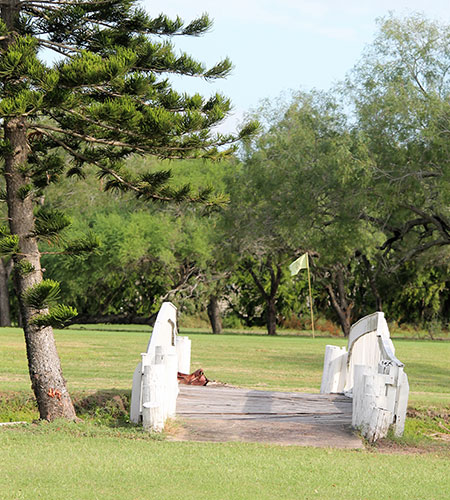 “It has rick and reward based on which way you go.”

Walking into Village Executive Golf Course – which is about five miles from Tierra Santa, is like walking into the bar “Cheers,” instead of everybody knowing your name, it’s manager Marvie Torres who welcomes you in and knows you like family.

“Everyone considers this a mom and pop type place,” Torres said. “I know them all by name; I know what they like to drink and a lot about them.”

The mainly par-3 nine-hole course is a favorite among the Winter Texans “because it feels like home, it’s very comfortable. We’ve developed relationships, I have them on Facebook and we keep in touch.”

It’s also home to No. 9, the only par-3 that a hole-in-one hasn’t been recorded on. While it’s a straight shot – but with a crossing win usually, there seems to be a barrier around the finishing hole. Torres said that there’s a registry that goes back to the opening days of the golf course and taqueria (the official name is Village Executive Golf Course and Taqueria Del Golf).

“I don’t know why nobody has gotten a hole-in-one there,” Torres said. “Everybody likes No. 9. But they just haven’t (made a hole-in-one).”

Another gem is the fact that Estero Llano Grande State Park (part of the World Birding Center) is just across the road.

“A lot of golfers bring their cameras here because there’s a lot of nature on the course,” Torres said. “There are all sorts of beautiful birds that come to the course too.”

This course is a jewel of golf history. That alone is a gem for golfers of all levels and experience.

The 27-hole municipal course doesn’t, however, just rest on its laurels.

Most golfers are encouraged to lay up about 110 yards from the green where two ponds on each side of the fairway challenges golfers to “go for it.”

“The crazy ones like to think they can get it over,” Arce joked. “I guess potentially some of them can get across.”

For a bigger challenge, Arce said, go all the way back and tee off from the tips, where there’s a large ditch-like hazard that needs to be carried before attacking the rest of the sharp dogleg right.

“You can’t see the green from those tees,” Arce said. “If you hit too far right, you’re in an area with some natural terrain like mesquite and there’s a holding pond and a lot of native vegetation. It’s very brushy. On the other side we have more manicured trees. You can hit under and play through those.”

Click HERE to vote for your favorite golf hole.