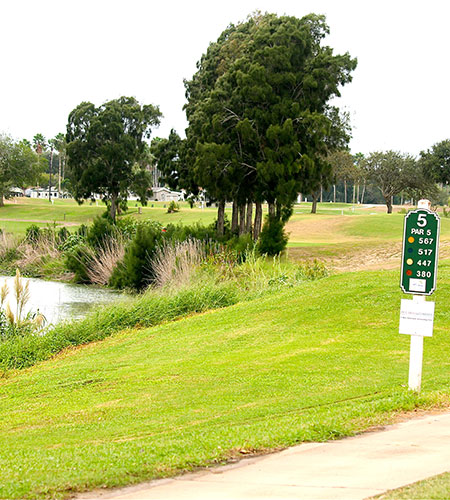 Similarly, golf courses have some hidden gems of their own. Sure, they have their “signature holes,” usually the most difficult, most scenic or most unique (most of the time all three) hole on the course.

But hidden away are those other holes that bring a smile to a golfer’s face (sometimes dread) but, just like a mystery writer who throws twists and turns throughout their novels, golf courses do the same.

Three of the courses in the Lower Rio Grande Valley that often appear on top of Winter Texans’ favorite places to play are no different. And, over the course of the past 12-18 months have made some changes to not only improve the course but also have made some of their gems all “shiny and new again.”

Its signature hole is No. 17, a par-3 hole that sits about 220 yards and along the levy. It’s both scenic and can range in level of difficulty based on which tees it’s played from and how the wind is blowing – and from where.

But for Adrian Garcia, a retired golf coach for 30 years, 20 of them at Brownsville Hanna, River Bend offers multiple gems, especially No. 4, a 397-yard par-4.

“The blue and the gold tees are at different angles to start off,” Garcia said. “It’s a little bit like a bowl from the levy and it works its way up.

“The dogleg right fairway flows into an elevated green. But if you don’t hit your tee shot to the left or left-center side, you will have a blind shot going into the green. If you hit too close to the right, you won’t be able to hit over the magnificent South Oaks.

“When I first played No. 4, I didn’t think I was in the Valley,” Garcia said. “I was like ‘where did all these hills come from?’ It’s just an amazing hole.” 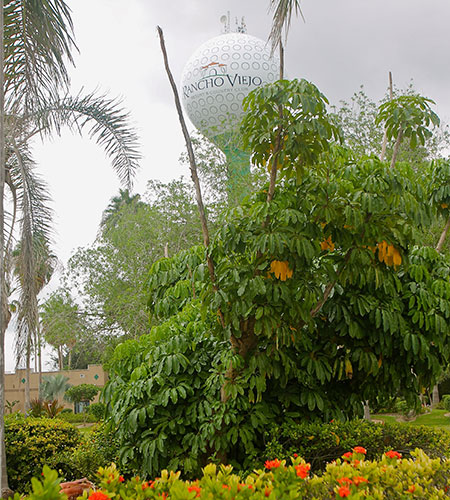 Rancho has a gem both on and away from the golf course.

The off-the-course gem is the Top Tracer driving range setup. It is a covered hitting area with monitor, televisions, a bar with food and there’s also music. The Top Tracer Range is owned by Top Golf. Golfers can set up a points competition, play a long drive or closest to the pin contest with friends and even set up the monitor to play Pebble Beach or St. Andrews.

“This is very unique – hardly anyone in the country has it,” said Golf Pro Don Keen, who is on his second stint at the course, working there first 25 years ago. “There are 11 golf courses you can play with a foursome like a scramble.

“You’re just hitting into the range but on the monitor, you’re hitting the fairways of Pebble Beach and it’s open to the public.”

Keen returned to help work some projects to improve the course and give it a new look. One of the holes that has completely taken a new look is No. 15, the par-4 315-yard dogleg that will challenge a golfer’s skill and mind.

“It is very picturesque,” Keen said. “It used to be a straight hole and now it’s a total change. We moved 15 palm trees from one side of the fairway to another, a fairway bunker, a big bern was added so the ball doesn’t run out of bounds. ... it’s a real nice hold.”

The golfer can play the dogleg or try to carry the lake and get close, or onto the green. The fairway is fairly narrow but was widened in areas (and made thinner in others).

“It’s a risk and reward hole,” Keen said. “Some of the bigger hitters like to carry the water, it’s just the corner of it. Others will play it safe – but it definitely makes you think.” 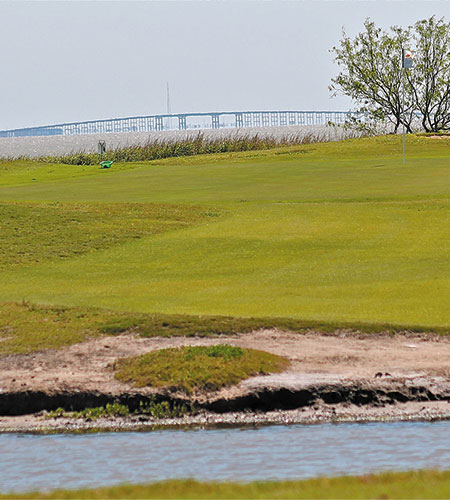 Just the name South Padre Island Golf Course implies beauty and a great golf course and Bracy Wilson, and the course’s owners, are returning the course to where it once was, where it should be, and beyond.

While No. 3 is considered the signature hole, golf pro Bracy Wilson said, “just because of the water and to be able to see across to the island makes numbers four and five gems as well.”

No. 4 is a par-5 hole. Don’t get distracted by the beauty of this 525-yard hold that has a slight dogleg right (“It barely drifts back to the right,” Wilson said.) And don’t hit too far to the right because your ball is almost assuredly lost in the native area. You won’t find your ball and what you will find, you’ll want to keep away from.

No. 5 is a short par-4 at 296 yards. Don’t be deceived though. That same refreshing breeze coming across the Laguna that makes one feel great, is the same blistery wind that can make this short hold unreachable to even the strongest of hitters.

“You have to hit over an inlet and it’s a short hole,” Wilson said. “But the drive will make you or break you.

“But those are very scenic holes.”