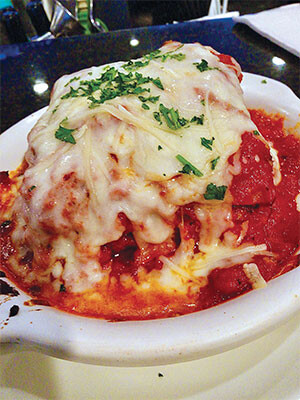 Where I grew up in Upstate, New York (in the foothills of the Adirondack mountains), there was a saying – “You're either Italian, or you want to be Italian.”

I was in the “want to be" category.

I lived among friends who were mainly German, Polish or Italian. My mom was French and Italian. I was adopted.

My favorite food is Italian – I spent six weeks in Italy one summer that was absolutely phenomenal. Along the way, I have grown to be a lasagna snob. One time, my then-wife made lasagna for me and asked a couple days later how it was.

“OK?” she asked. My “then” wife, now “ex” wife – I do not think lasagna was the breaking point though.

Rarely will I order lasagna at a restaurant for fear that it will not come close to what I've learned to expect or want. Even more rare is going back to the same restaurant to order it a second time. Only three or four places max have reached that level of greatness in my eyes.

Still, the welcoming ambiance of Stefano's in Harlingen had me thinking about reaching out of my comfort zone and ordering the lasagna, especially after the amazingly delicious crab-meat stuffed mushrooms in a creamy and not overpowering chipotle sauce. 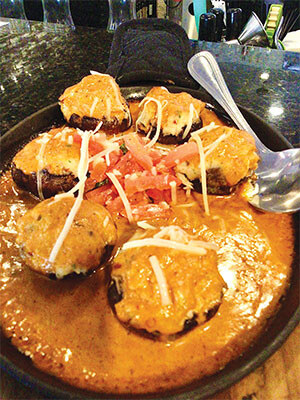 The establishment is situated on land that is comfortable, enticing, and peaceful. It reminds me of a northern lodge in the summer – and by northern, I mean back home in the mountains or somewhere in the northern Minnesota region.

The waiter had no doubt on what he liked and did not really care for on the menu, immediately pointing me to the mushrooms. For the entree, however, I decided to attack the lasagna.
When it arrived, I was happily impressed by the size. Lasagna needs to be thick – and this was. But what makes it thick is the focal point for me. I want mozzarella, ricotta, sausage, beef – I want it loaded. I want the cheese and the meat to battle for supremacy when it comes to taste. That, to me, makes a good lasagna great. This one had all the essentials spot on.

Third is the sauce. This sauce was very good. You could taste the tomato freshness in it. For me, you do not want a sauce to be watery, or weighed down with every spice in your pantry. This one was neither. The sauce was thick, and the freshness was not marred by spices.

It was a meal unto itself to say the least. Between the comfortable interior, the beautiful and calm surroundings, and a menu with a myriad of choices, this is a place you need to put on your “have to go there” lists. It also has a bar, dozens of draught beers, a wide wine selection and a separate building for to-go orders.

I definitely plan on going back. And even though it was a large and varied menu, you may see me there once again with a big ole' square of lasagna and a Cheshire cat-like grin on my face.