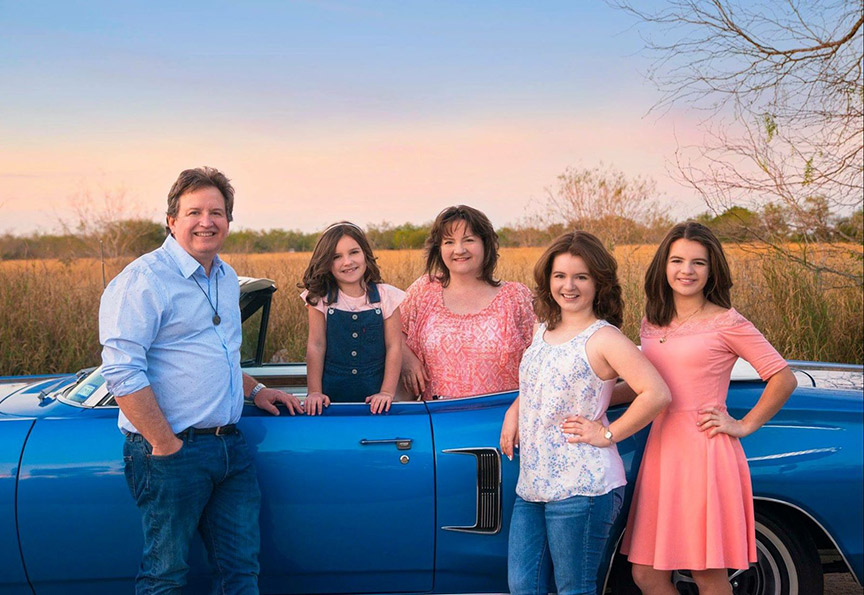 Kevin Williamson, was in the second grade when his father, Jerry, brought home a plywood guitar. This proved to be a life-shaping event for them both. Kevin tagged along as his dad joined bands, learned songwriting and provided sound reinforcement for bluegrass festivals. While still in high school Kevin was already performing in the bands of prominent pickers Glenn Duncan then Dave Evans. He went on to recorded critically acclaimed albums with each. Jerry & Kevin formed the group Redwing when Kevin was 18 and toured North America together for 10 years. After his marriage to Debbie, the couple started Shadow Ridge recording for Pinecastle Records and again touring. When their daughter, Melody, arrived in 1998, the Williamsons exchanged band touring for local venues and children’s performances. Kevin began traveling and performing again in 2010 with The Country Gentlemen and, two years later The Farm Hands. Along the way Kevin has been blessed to have placed an original song on Claire Lynch’s GRAMMY nominated Moonlighter project. He was nominated for SPBGMA’s Entertainer of the Year and was awarded their Album of the Year award in 2014. Still, Kevin views Williamson Branch as his crowning musical achievement – he plays guitar, sings and writes songs while guiding his family as they delight audiences across America and beyond.

Debbie Williamson grew up singing in church. In her younger days her father, Michael Smythers was a nightclub singer, so Debbie was bitten by the performing bug at an early age. When she and Kevin met, Debbie was introduced to bluegrass music. The two married in 1991 and two years later they founded the band, Shadow Ridge. In 1996 Debbie recorded a solo project for Mid-Knight Records which received very favorable reviews. The Baltimore Sun described her voice as, "cool and sweet as a mountain stream". Debbie brings those cool and sweet lead & harmony vocals to Williamson Branch, along with her solid mandolin rhythm. A true joy to watch on stage, it’s easy to see how much Debbie loves singing and watching her family shine. She fervently believes that 99% of the problems within the human condition can be cured by water - either sitting beside it or drinking it.

At 19 years old, Melody Williamson has quite literally grown up on stage. Debbie would hold 2-year-old Melody on her hip while also holding a microphone for the talented toddler. Melody is the fiddler for Williamson Branch, but she also contributes to the band with her beautiful voice, original songs, clog dancing and her engaging emcee work. Her composition titled, There's No Country Here, has over a million views on several social media sites and climbed to #15 on the independent country radio charts. Melody’s song, Someday, was one of only ten songs featured on the International Bluegrass Music Association’s Songwriter Showcase in 2015. An alum of IBMA’s elite, Kids on Bluegrass and the organization, Tomorrow's Bluegrass Stars, Melody has won many awards for both her fiddling and dancing.

“Melody has a big future in this business. With her songwriting, fiddling, and lead singing abilities already at a high level.” -Bluegrass Unlimited

Kadence Williamson, is the 16-year-old bass player for Williamson Branch. She is also a marvelous singer, songwriter and clog dancer. Her ukelele bass, or Ubass, might look like a toy, but in Kadence’s hands it is a weapon of bass production. Kadence’s voice combines pop stylings with traditional influences. While wearing a smile that can light up any room, this teen performs several engaging bass solos adding fun musical moments to Williamson Branch’s shows and CDs. She is currently a featured member of the International Bluegrass Music Association’s; Kids on Bluegrass showcase and she is also a member of the honorary group Tomorrow's Bluegrass Stars. “Kadence, may become the instrumental star of the bunch... (she) plays a U-Bass with the punch and growl of a standard-size bass... and rock-solid timing...” Bluegrass Today

Caroline Williamson plays fiddle, ukulele, clog-dances and she has been singing harmony since she was 3. This 9-year-old has already penned one song in the Williamson Branch catalog and she has a reputation for winning audiences with her sassy version of Loretta Lynn's, You Ain't Woman Enough to take my man. Also a member of Tomorrow's Bluegrass Stars, Caroline often surprises folks with her willingness to quip with her family during performances. It’s easy to see why Williamson Branch and their audiences have dubbed her, the show stealer!

"Amazing talent from the entire family, but the youngest, Caroline, truly captured our hearts!" Loriann in PA

These days look for the prodigious Anthony Howell playing banjo with Williamson Branch. At 18 years of age Anthony has already been voted by the folks at Mississippi’s Magnolia Bluegrass Association, Banjo Player of the Year – twice! Anthony also serves as utility musician for the group adding additional mandolin and guitar where needed. With a big grin and a bigger southern drawl, Anthony is a perfect fit for Williamson Branch.