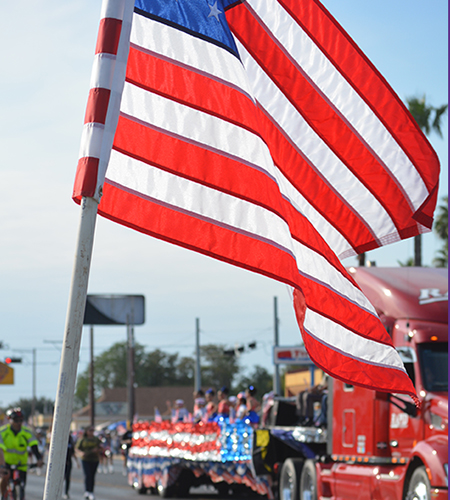 The hour and a half patriotic parade was part of the city’s Veterans Day observance, which stretched over four days, starting with a flag laying ceremony Friday afternoon at the Texas State Veteran Cemetery in Mission.

It was the parade that drew several hundred spectators along Business 83, including from Mission, flag-waving Jesse Martinez and his granddaughter Jaynee, to applaud the service veterans riding in the parade.

Among those given a ride was the grand marshal, Lt. Col. Arnulfo Esqueda, a 30-year U.S. Army veteran and a Mission native.

“It was a great honor and privilege to represent all the veterans,” he said. “I want people to appreciate the veterans. Veterans want to play a role in the community.”

Esqueda joined the military at the age of 18 in 1965 and was in the Vietnam jungles for four years as a special forces operative. The green beret was a leader of one of the six-member teams involved in top secret cross border interdiction missions. His team, among others, which included two Americans and four South Vietnam soldiers each, were attached to the secret Military Assistance Command Special Operations Group. They operated mainly along the Ho Chi Ming Trail that wound through North Vietnam, Laos and Cambodia.

The retired officer said the greatest fear while deep in enemy territory was being captured. He said they were on their own at night, without communication with allied forces, but by day were back in contact and had U.S. air support if needed. What was also hard to comprehend was the condemning response from the public after returning home. There was no parade for soldiers who fought in Vietnam, he noted. 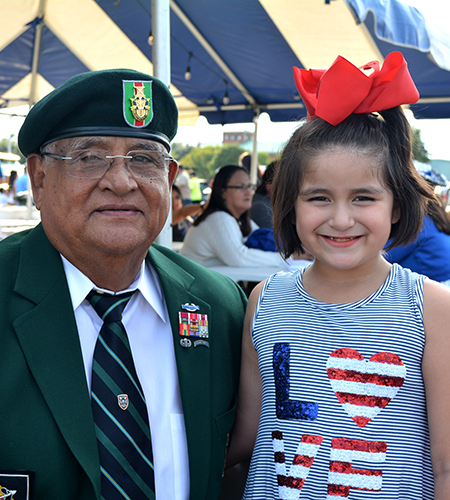 When his Vietnam tour ended in 1969, he went to college and also joined the Texas National Guard as a 2nd lieutenant, which was a part time situation until 1979. Then he went on active duty with the guard. He received his lieutenant colonel rank in 1993 and finished his service in 1995.

A World War II veteran, Savas Sandoval Jr., got to ride in a Mercedes Benz classic convertible. He served in the U.S. Army in the Aleutian Islands of Alaska from 1942 until 1945. Army 1st Sgt. Victor Fonseca was among veterans riding in golf carts.

The day also included the first Veterans Cook-off that began at 9 o’clock in the morning. A total of 26 teams competed for $5,000 in cash and trophies in five categories of chicken, pork spareribs, brisket, pan de campo and citrus dessert.

There was live music and food vendors on hand as the cookers worked their magic throughout the day. Head judge for the International Barbecue Cookers Association (IBCA), Eddie Tapia, has been running cook-off competitions for 13 years, which takes him all over the Valley. He said he began with just two events his first year, but now he averages more than two per month. His wife, Judy, helps him in distributing the entries to the local volunteer taste judges.

David Santoy, who heads the South Texas BBQ team, said he recruited eight family members and friends to join him in working the cook-off, which he’s been doing for four years. He’s out about once a month on average to compete.

“I love barbecuing and hanging out,” the Mission resident said. “It’s a ‘win, win’ time.”

Andy Garza, the head cook for the Mi Pedasito Ranch team, also from Mission, said he’s been involved in cook-offs for 10 years. He currently does about five events a year as time permits. 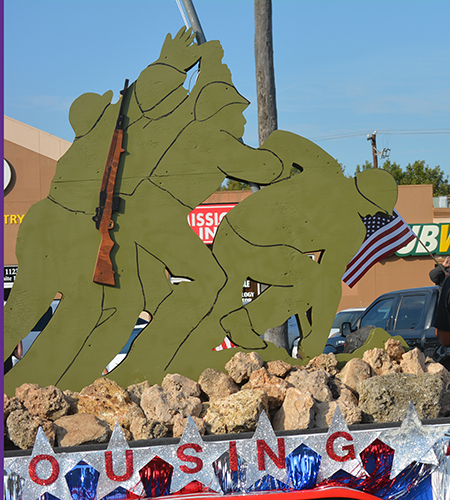 His wife, Blanca, said, “We enjoy it, and it’s all family members on the team.”

The first 10 placings in each event received recognition, with the top five earning cash awards and a winning plaque to each first-place team.

The Veterans Cook-off grand championship trophy went to the Cowboy Up Cooking team headed by Ralph Flores of Edinburg. His team earned the top award by winning the pan de campo division, placing third in chicken barbecue, fourth in pork spareribs and eighth in brisket.

The reserve championship belonged to Chew N the Fat squad with head cook Jason Bartimus. Also, from Edinburg, the team topped the pork spareribs category and placed fifth in brisket.

Top finishers in the other categories included BBQ Holics, taking first in the chicken category with Hector Cantu the head cook from La Feria; the Chillin N Grillin team headed by Mario Benavides from McAllen, and Bridget Gonzalez who topped the dessert division.

The festival also included an evening of entertainment with music by several bands on stage in conjunction with the 5x5 Brewery sponsors. Kids rides went on all day.

The festival salute continued on Sunday afternoon, Nov. 10, with a Cars and Stripes car show along with a chili cook-off between five veteran’s teams, with winners chosen by “people’s choice.”

Wrapping up the celebration was the Veterans Day golf tournament, The Fairway to Freedom, a 3-person scramble. The tournament, free to veterans, was played at Sharyland Municipal Golf Course. The event was featured in last week’s paper.