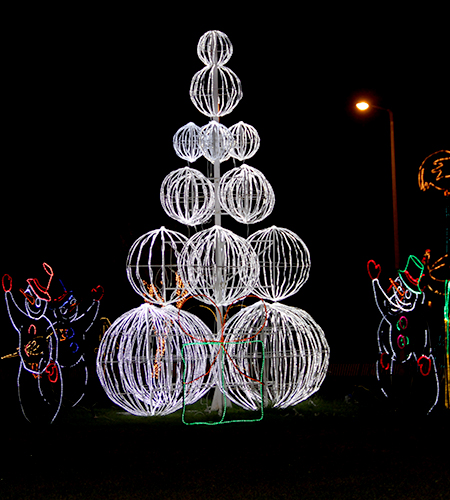 The Hidalgo Festival of Lights has become a regular Christmas season must see. With the lighting of the tree, millions of Christmas lights, illuminated nighttime parade, trolley tours, dinner and entertainment, there is plenty to do and see for everyone. The festival officially begins with the lighting of the tree on Sunday, December 1 at 7 p.m. in the front of the Hidalgo City Hall, 704 E. Ramon Ayala Drive.

This year’s theme, announced earlier this month, is Winterland. The festivities will feature Anna and Elsa and other characters from the movie Frozen.

One of the main attractions, and part of their kickoff, is the illuminated nighttime parade. The parade welcomes its visitors with a colorful and Winterland themed parade in from of the City Hall at 7 p.m. on Friday, December 6. The parade will bring spectacular performances with illuminated floats, marching bands, performers from across the Valley, and of course, Santa. After the parade, visitors will be enjoy entertainment, food, photos with Santa and more.

The trolley tours, a favorite among visitors, begin on Sunday, December 1 and continue through December 30, from 6 to 10 p.m. Visitors will have a chance to tour the three miles of over 500 illuminated displays and over five million lights for $5. The tour also has a narrated guide with holiday music.

Every evening during the festival, except December 24 and 25, the carnival court will be open from 6 to 10 p.m. Visitors can enjoy carnival rides and delicious carnival food at City Hall Plaza.

Santa’s House will be open from December 1 through 23. Santa will be in town receiving children, and adults, for laughs and pictures. He will be at the City Hall Plaza from 6 to 10 p.m.

The Hidalgo Posada with Ramon Ayala is a long-standing tradition that the Rio Grande Valley looks forward to every year. The “King of the Accordion” and Latin Grammy Award Winner, Ramon Ayala, with the City of Hidalgo, hosts a free concert on Wednesday, December 18 at 5 p.m. The event has garnered over 50 thousand in attendance. The posada begins at 5 p.m. with a ribbon cutting ceremony. The event also celebrates the over 10,000 toys that have been donated by local businesses. The toys will go to low-income children in the area.

Another event you don’t want to miss, the Holiday Artisan Market where visitors can find beautiful, unique products made by local businesses and residents. The market will be at the City Hall Plaza from 6 to 10 p.m., December 1-30.

Sponsors this year include Coca-Cola and HEB. The sponsors will be holding their own special events during the month. Every Monday in December you can meet and take a picture with the Coca-Cola Polar Bear for free. HEB will have lots of surprises for attendees at City Hall Plaza Saturday, December 21, 6 to 10 p.m.

HEB will also have their Super Glide Synthetic Ice Rink available for guests from December 11-23, 6 to 10 p.m.

On December 5-8 and December 11-17, Hidalgo Festival of Lights will offer Dinner and Entertainment packages. The packages are $13 per person. Depending on the day, meals include sautéed chicken breast, Salisbury steak or roast beef entrees. The package also includes VIP seating for the community performance and the narrated train light tour. Dinner times are 5:15 and 6:15 p.m. Call (956) 843-5311 or email specialevetns@cityofhidalgo.net for reservations and more information.

Each night will feature talented performers. Also included in the entertainment, and what has become a tradition, is the famous Estudiantina de San Luis Potosi, who come from San Luis Potosi, Mexico to perform. They will be performing December 12-16.

Entertainment will be throughout the month at the city hall courtyard starting at 7 p.m.
For more information and a full schedule of events, visit their website online at hidalgofestivaloflights.com.