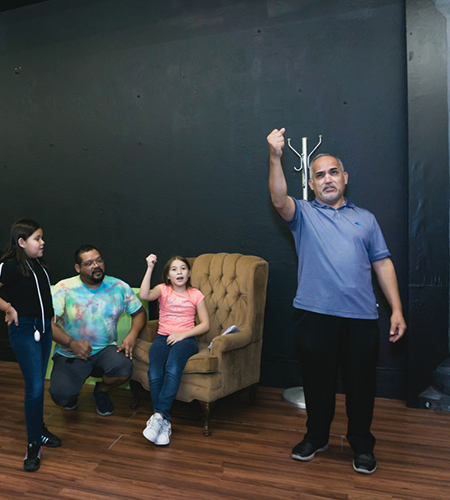 Have you ever stopped to consider, what would happen in the RGV if the Rio Grande (river) dried up? Would it be a catastrophe? Would we be a thirsty region?

“In reality most people take the river for granted when it comes to acknowledging it’s most important resource,” says Pharr Community Theater Artistic Director Pedro Garcia.

“I happen to be a large fan of el Rio Grande and it’s nearly 1,900 miles of trajectory starting in the San Juan Mountains of southwestern Colorado, running south through the entire length of New Mexico, down to El Paso, where it bends southeastward on its way to the Gulf of Mexico via Boca Chica in Brownsville. In our play the river has a lead role, so to speak.”

A Tejano Christmas Carol is a comedic and dramatic play where Mr. Ezequiel Codos (a scrooge equivalent) is a powerful, avarice RGV attorney and water broker. For some time now Mr. Codos has been brewing up plans to sell large amounts of water rights from his vast property along both sides of the river.

“This deal is gonna make me a multi-millionaire”, he says to his nephew and water rights activist, Beto, played by Danilo Zepeda, from Edinburg, who invites him to Christmas dinner in spite of his rudeness.

Of course, many of us know the Charles Dickens story from which the play is adapted including visits by ghosts. In this tale the ghost of Christmas past is La Rielera de la Revolución Mexicana played by veteran stage actress, Armandina Sesin, from Mission.

“I’ve performed the role of La Rielera for the last four years and I always have a good time as my character tries to instill some good sense into the tight-fisted Mr. Codos.”

Even the late, great conductor/composer Laurence Welk makes a youthful appearance as a ghost played by 16-year-old Frankie Sharp Hooton from Weslaco.

“He’s a popularized 1950’s-1970’s TV entertainer, he performed lots of music and interviews but mostly he was a big band conductor, an orchestra person. From the research I did, he seemed like a fun guy although a mono-tonal person which I’m not, but I had to learn how to dial it down while racking it up at the same time. For me it’s a difficult role to play but ultimately the part is doable with practice and a whole lot of fun.”

The two-act family play, in English, is set in 2007 when the RGV had a big snowfall on Christmas eve. The play returns to Pharr by popular demand with a local cast of nearly 20 adults and children combined and is directed by Seres Jaime Magaña. Claudia Jimenez is stage manager and longtime Screen Actor Guild member Pedro Garcia, co-produces and plays Codos for the 4th year in a row.

“Next time I’ll be glad to give up the fun role to someone else and see another local actor take a turn at it,” said Garcia with a chuckle.

“It’s a family play for the holiday with a grand message and something fun to watch for this season, plus we have a versatile, creative and disciplined cast,” added director Magaña.

A Tejano Christmas Carol plays December 4-8, at Pharr Community Theater, 213 W. Newcombe Ave., Wednesday through Saturday at 7:30 p.m. and Sunday at 3 p.m. Tickets are only $5 students, seniors and military or $8 general admission. Seating is limited to 55 persons per show and tickets will be sold at the door starting one hour before curtain upon availability. You may also reserve your advance tickets by texting or calling (956) 239-0412 or (956) 655-9308

A final show will be held on Thursday, December 12, at 7:30 p.m. at the spacious Pharr Events Center at 3000 N Cage Blvd. Tickets will remain the same price.