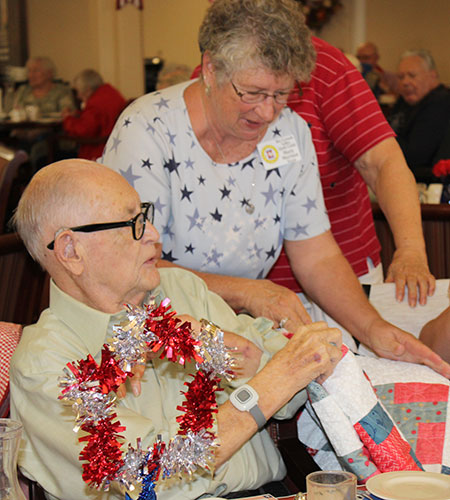 Eyes and faces were wet Monday afternoon as the colors were presented by the PSJA Early College High School JROTC during a Veterans event at Brookridge Retirement Community. Quilts in red, white and blue made by the Rio Grande Valley Quilt Guild hung along the stairway and banisters that circled the dining hall.

Veterans filled the dining hall and stood while the colors were posted, and they sang the national anthem. Some stood even though they needed an extra hand or something to lean on. The vets still showed their love for the country they served, even if their bodies were far different than the ones they had when they served.

The Veterans at the community were gathered to receive quilts that were lovingly made by the RGV Quilt Guild. This group of ladies work tirelessly to be able to present quilts and wall hangings to a community every Veterans Day. This year, they made over 20 quilts for the vets at Brookridge.

The event started with the presentation of the colors, then the anthem, Pledge of Allegiance, and the music for each branch of military was played as well. As the music played, vets representing that branch stood at attention with their fingers to their foreheads, paying their respect to the flags, to their country, and to each other.

After this, a poem was read. The poem, titled Thank You Veterans, was written by a then fifth grader, Justin. It read,

“Thank you for the job well done.

Thank you for the battles won.

Thank you for the battles fought.

Thank you for the freedom bought.

Thank you for the time you served.

Thank you for the freedom earned.

Thank your families for sharing you.

I know they miss you, they really do.

I’m sorry for the lives that were lost.

It comes at a very high cost.

I love my freedom,

My Red, White and Blue.

Thank you Veterans for all that you do.”

Leslie, a Brookridge representative, said a short prayer for the food and the veterans before introducing the ladies of the RGV Quilt Guild. 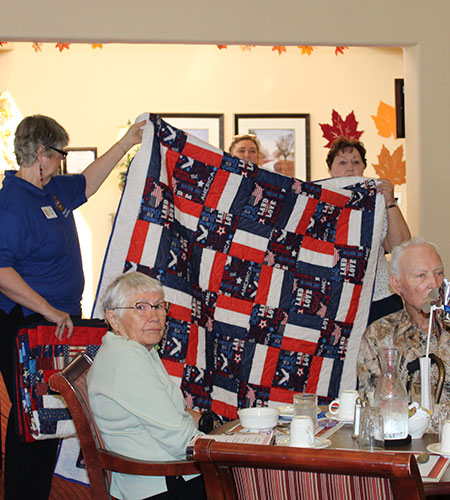 Quilts were presented to each Veteran in attendance. One by one they were recognized for their service.
There were petty officers, specialists, corporals, lieutenants, staff sergeants, sergeants, seamen, and other ranks of all the military branches.

One sergeant receiving a blanket was the only female WWII veteran at the community. Annette said she served in public relations. While serving, she was stationed in three different areas. She shared that she was present as they would bring in the soldiers from the hospitals.

“The hardest, was seeing those that came from Japan,” she said. “From the prisoner of war camps.”

She, as were all the other veterans, were thrilled to receive their quilts. Annette was excited to talk to one of the RGV Quilt Guild members telling her she used to sew quilts years ago.

The event included a barbecue lunch for the Veterans and their family members.

The RGV Quilt Guild has about 300 members during the Winter Texan season. The group meets every second Saturday of the month from 9 a.m. to noon at Trophy Gardens RV Park in Alamo, 800 Hwy 495. Each month features a different speaker. December 14 will feature Tina Hilton (Turtle Hand Batik) and a surprise guest. They also hold an Annual Quilt Show in February on SPI. Visit www.rgvqg.com for more information.