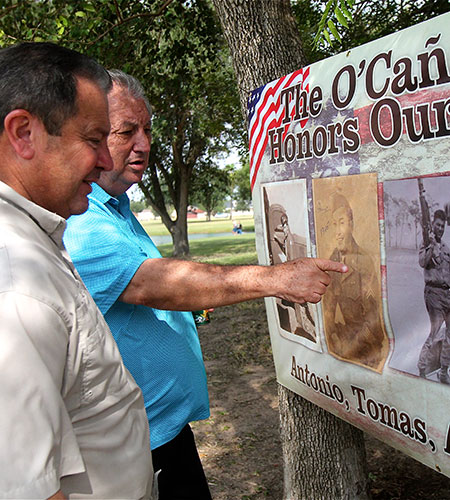 Jim Bartelt was out golfing for the first time in five years.

The Minnesota resident and Navy veteran, now a Winter Texan for 13 years, couldn’t golf because of a surgery, “and falling down the stairs didn’t help,” he said.

He was one of more than 100 veterans who enjoyed a free day on Shary Municipal Golf Course as part of the City of Mission’s Veterans Weekend celebration.

“The first thing I want to do is thank God for letting us be able to serve these veterans who have served our country,” Mission Mayor Armando O’Cana said. “This veteran’s weekend is going to become an annual thing. The feed back and reaction to these events have been wonderful.”

The City of Mission, Ready Tee, the Red, White and Blue Foundation and Lone Star National Bank were major sponsors and not only provided the veterans with the free tournament, but also fed them on the course with tacos, ribs, grilled pineapple and more at hole No. 10, sponsored by the O’Cana family.

The Mayor said that while he was not a veteran, his dad served during World War II and his brothers both had tours of duty in Vietnam. He added that he was a golfer however who played military-style golf. “I hit my ball left, then right, then left...” he joked.

The city turned a Veterans Day into a full weekend celebration with events including a solemn flag ceremony where they placed a flag at every tombstone in the Mission Veterans Cemetery, opened the Veterans Park to the public, had what they expected to be a small parade turn into an event with 70 entries, a car show and other events at 5x5 Brewery, and a one-stop shop with more than 20 agencies in attendance that serve veterans to provide information and services.

“We also had a Vaquero cook off, and a chili cook off with different groups representing different branches,” the mayor said. “A group of cooks from the Marines won that event.

“Our veterans have already given the time for us to be able to be free and to run a city government in a peaceful setting,” O’Cana said. “Now we are committed to making this an annual event that’s bigger and better.”

Door prizes were given to each of the 108 veterans who participated.

“This is a great day,” said Bartelt, who resides at W&I a Resort in Mission, a park he said his in-laws started. “My doctor said I could give it a try, so I am doing it. This is a great event and was a terrific weekend. I love it.”