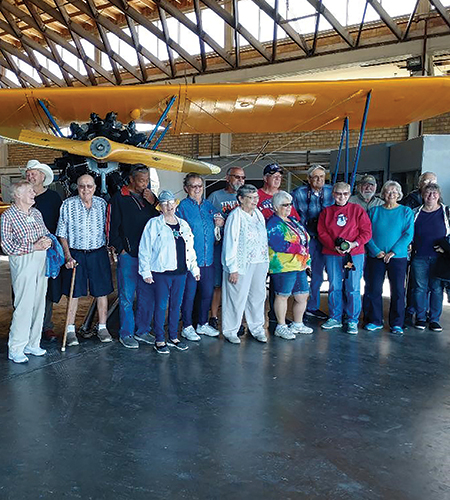 Volunteers from the Rio Grande Valley Wing of the Commemorative Air Force conducted a museum and airport tour of their facilities Monday, December 23, 2019. The tour group was from the Eastgate Mobil Home & RV Park in Harlingen, Texas.

CAF Colonel Dave Christopher conducted the tour of the museum. Displayed in the museum are photos, artifacts, and exhibits donated by families of World War II veterans. An enlarged photo taken by a Japanese flight commander shows the plane and the explosion of the first bomb dropped on Pearl Harbor on December 7, 1941, which is the event that brought the United States into World War II.

Museum tours are conducted as requested. Group tours of ten or more are scheduled by calling Dave Christopher at (970) 397-4604. Dave will schedule pilots and volunteers for the appointed date. Tour rates are $5 per person.

The Rio Grande Valley Wing Aviation and Transportation Museum is located within the Port Isabel Cameron County Airport on Veterans Airport Drive and can be reached via Farm Market 106 between Rio Hondo and Laguna Vista.