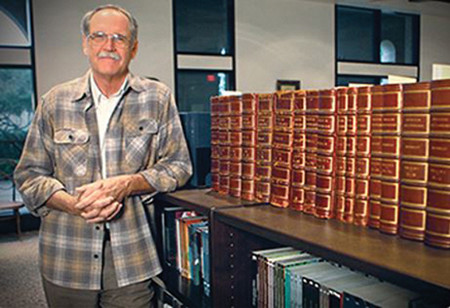 President and CEO of the Gorgas Science Foundation, Lawrence “Larry” Lof, will be sharing his expertise and knowledge of the ever-changing Rio Grande River at Quinta Mazatlán’s Nights at the Mansion Speaker Series. Join Lof Thursday, February 27, at 6 p.m. as he presents, “The Rio Grande: Reflections on a Disappearing River.”

The Rio Grande River and the ecosystems along its banks have changed dramatically in the last 150 years. Until the middle of the 19th century the Rio Grande was a mighty river. It was often called North America’s second Mississippi. Looking at the Rio Grande River today, it is hard to visualize the fleet of steamboats that once fought the strong current far up river or the miles of dense palm forest that dominated the lower course of river delta. By 1902, the last riverboat ceased to operate. The Sabal Palm forests that covered the richest alluvial delta soils fell prey to the agricultural boom of the late 19th and 20th century. By the mid-20th century only a few isolated patches survived. One on San Tomas (Rabb) Plantation, now known as, Sabal Palm Sanctuary; a sheltered 29-acre tract of old growth forest surviving adjacent to the Historic Rabb Plantation House. The Audubon Society preserved and formed a core to begin reforestation efforts; the Gorgas Science Foundation now manages this legacy.

Mr. Lof was awarded professor emeritus status at UTRGV Valley in 2013 for his efforts in starting the El Cielo Biosphere Reserve, a 145,000-hectare conservation zone preserving one of the most biodiverse areas of the Western Hemisphere and the northernmost tropical cloud forest in the Americas. He has also helped restore historic structures, one being the iconic 1937 Neutra House, a rare local relict that was once listed as one of the 10 most endangered historic structures in the US. He continues to lead efforts to restore buildings in historic Brownsville, Texas.

Nights at the Mansion speaker series presents noteworthy speakers and scholars to present lectures related to our global environment, local cuisine and the arts and culture. The program takes place on Thursday evenings through May 2020. The program fee is $3 per person. Advanced reservation is not required. Quinta Mazatlán is located at 600 Sunset Drive in McAllen, one block south of La Plaza Mall on 10th Street. For more information, contact Quinta Mazatlán at (956) 681-3370.