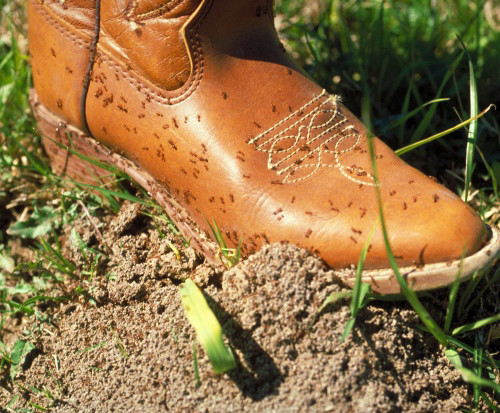 “Spring is a good time to begin your imported red fire ant control because this is the time of year when the ants are searching for food and starting to build those mounds that make them much easier easy to locate,” said Mike Merchant, Ph.D., AgriLife Extension urban entomologist at the Texas A&M AgriLife Research and Extension Center in Dallas.

He also noted with more people stuck at home during the COVID-19 pandemic, treating for fire ants might just be a perfect task for the property owner who is ‘antsy’ to get outside.

“The two-step method is less labor-intensive, less toxic and more environmentally friendly than most other means of do-it-yourself fire ant control,” he said.

Using a spreader to broadcast fire ant bait over the area needing to be treated is the first step of the Two-Step Method. (Texas A&M AgriLife photo) 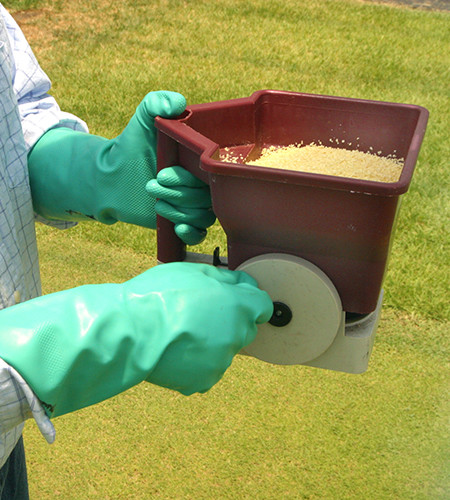 Merchant said the use of fire ant bait as the first step is effective as temperatures begin to rise and ants begin to gather forage to feed their new brood.

“Spring and fall are particularly good times to apply baits,” he said. “Once it gets hot and dry, as during the summer months, fire ants become less active and mounds become less visible as ants go deeper into the soil.”

“Fire ant colonies can be difficult to locate, especially over a large area, so using a bait is less costly in terms of time and the amount of product needed for treating larger areas,” Puckett said. “With baits, ants pick up the bait and return it to the nest, so they do most of the work for you.”

He said the fire ant bait concentration is very low compared to residential insecticides, The amount of grains per area going by recommendations is fairly low, so it’s not necessary to use a lot of insecticide.

“The efficacy of baits may differ, but they all work pretty well,” he said. “However, the baits that work faster are also usually more expensive, so you have to weigh if the cost is worth the result.”

“Because fire ant mounds are most visible this time of year, especially after a rain, they are easier to locate in order to do the second step,” Merchant said. “This involves treating the largest or most troublesome mounds with an individual mound treatment, such as a liquid drench or some form of granular, non-bait insecticide or dust.” 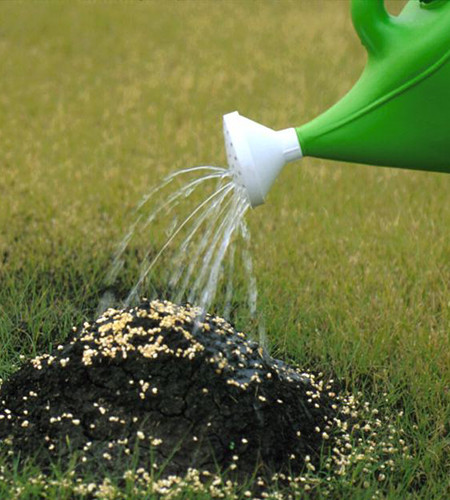 For fire ant colonies next to structures or in high-traffic areas that require a quick control, the property owner should take step two and treat these mounds individually with a contact insecticide. Otherwise this step is optional.

“Most contact insecticides applied directly to the mound kill the colony in one to two days,” Puckett said. “If the area has just a few mounds, then it may not even be necessary to apply bait as a first step.”

He said the most important message he can give is to follow label instructions and not try to mix too little or too much water if using a liquid insecticide.

“These products have been tested for efficacy and safety at a particular concentration, so you don’t want to guess at what may or may not happen if you vary from instructions,” he said. “Also, remember to wear the proper protection such as gloves and possibly even safety goggles if you’re mixing chemicals. Be mindful of protecting yourself and protecting the environment.”

While the Two-Step Method can be used successfully by individual property owners, it can be even more successful if people throughout a neighborhood work together to control fire ant colony proliferation.

That’s what Wizzie Brown, AgriLife Extension integrated pest management specialist in Travis County, along with other residents of the Wood Glen community in Round Rock have been doing since 2005.

The Wood Glen community consists of 548 homes as well as a community park, green belt and walking trails.

“To my knowledge, this is the longest-running community-wide fire ant program in the state,” Brown said. “Neighbors join together to bait the entire neighborhood twice a year, and neighborhood activities include a fire ant information day during which they learn about baits and get advice on the proper application of fire ant control products.” 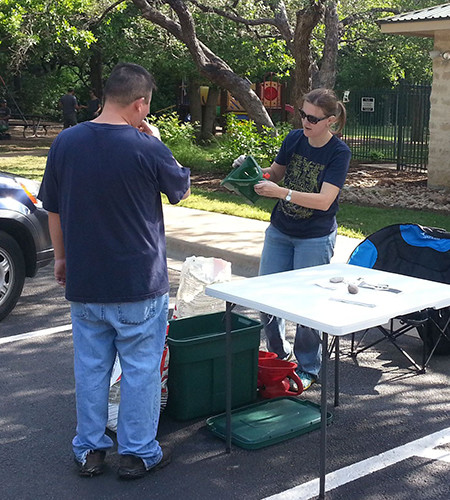 Getting the entire community involved also helps limit the spread of fire ant activity from one property to another, she said. The Wood Glen community recently coordinated the fire ant bait broadcasting portion of the Two-Step Method.

“The Wood Glen program’s success has largely been due to active community involvement along with an engaged and a helpful homeowners’ association,” Brown said. “You don’t need an entomologist living in the neighborhood to have a successful pest management program. All you need is a community champion and people in the community willing to support it.”

According to Merchant, AgriLife Extension also developed the Two-Step Method to help consumers make sense of all the fire ant control products on the market.

“The insecticide label determines where a product can be used, whether it’s a lawn, garden, agricultural production pasture or orchard,” Merchant said. “Users should always read the pesticide label to be sure the site they are treating is listed, then follow all label instructions.”

He also suggested the following tips for control of fire ants:

• Do not use gasoline or other petroleum products to control fire ants. Although these kill fire ants, they are highly flammable and are dangerous to both the user and the environment.
• Don’t leave insecticide granules on streets or sidewalks after application. Sweep up any excess product so it doesn’t wash into gutters or storm sewers and affect the water table.
• Always follow label directions on the proper disposal of pesticides. Do not pour pesticide leftovers down the drain as they are not easily removed by regular wastewater treatment.

“The Two-Step Method can be an efficient, effective and safe way to control fire ants for an individual home, large property or entire community,” Merchant said.