Hats off to McAllen! - one of the most progressive cities in the Rio Grande Valley. They seem to always have something big and wonderful planned for us to enjoy...from the huge Christmas Parade to the upcoming Fiesta de Palmas, formerly called Palm Fest. Not only is McAllen progressive, but they are also the largest city in Hidalgo County and according to the last census, McAllen is the 22nd most populous city in Texas.

McAllen is really fairly young - it began to grow after the railroad came in 2004. By 2011, McAllen was an incorporated city. In 1940, the city took as its motto “The City of Palms”. Actually, the native shrubs and trees were thorny, evergreen Rio Grande ash, cedar elm and honey mesquite mixed with a lot of cactus. Early land promoters saw the possibility and brought palm trees in from all over the world to transplant and transform our sub-tropical area into the tropical paradise of today. 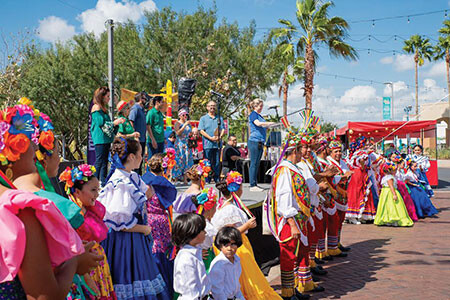 That attitude of “making a silk purse out of a sow’s ear” has carried over from the early settlers to McAllen’s leaders and citizens of today. If one were to classify the personality of McAllen - one might say that the city is a dreamer - a BIG dreamer. They dream big and then they work diligently to make that dream come true. That is exactly what they have done as they “reimagined” the Fiesta de Palmas.

The reimagined Fiesta de Palmas took some real dreaming and real imagination to organize a virtual festival that had formerly been celebrated in the traditional way. After months of inactivity, when most other venues have cancelled, McAllen decided to plan a “together again” festival mixing virtual and social distancing. You can attend in person on the first night for $40 which will allow eight people to actually experience the featured live entertainment. That is just $5 per person. Check their Facebook page for more information.

This “new normal” event has found new ways to celebrate by combining virtual, social distancing, curbside and drive thru. All activities will be outside on the grounds of the McAllen Convention Center located at 700 Convention Boulevard. Hours for the festival on November 7 are 5 p.m. – 9 p.m. and on November 8 from 12 p.m. – 8 p.m.

If you have a hankering for festival food, just drive by and pick up your festival type food at curb side. There will be food trucks from all over the Rio Grande Valley offering delicious local cuisine. The McAllen Rotary Club will have “Beer Boxes” for $35. This will also be a “pick up” offer featuring the best of international beers. The beer box will also include $55 in vouchers to business establishments in McAllen plus a lottery.

What a challenge it must have been to plan such an event! What a show of determination and cooperation from the citizens of McAllen to stage such a festival. Thanks, McAllen for forging ahead. You have set an example for all of us. If Plan A doesn’t work - then let’s go to Plan B.