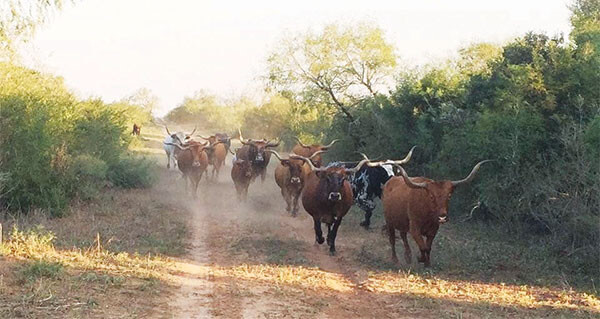 TEXAS! What a huge state we live in with a history as big as the state. Texas was tamed originally by settlers who established ranches and farms so big they boggle our minds. Those early settlers, those men of vision left their mark on Texas - Richard King who fulfilled our American dream of from rags to riches was just one of those many famous settlers who left their mark on Texas.

One of those marks is the word “maverick.” It is said that deep down every true Texan wants to be a maverick.

Now just what does that word mean? Supposedly a maverick is a person who is untethered, who thinks and acts on their own, maybe even a free spirit, a person who thinks out of the box. A maverick does not follow the herd.

Originally, cattle that were not branded were termed mavericks. It seems that a gentleman land speculator from Kentucky named Samuel Maverick settled in Texas in 1835. Now Sam was a lawyer and a legislator who knew the value of land even though he was not particularly fond of ranching or farming which was just about the only thing you could do with Texas land in the mid 1800's. Sam Maverick owned land in downtown San Antonio and ranches in Matagorda Bay and Eagle Pass. Sam Maverick also did not believe in branding his cattle. That must have been convenient for cattle often ran loose and unbranded during that time. One way to increase your herd was just to incorporate those open range unbranded cattle into your herd.

One of his land holdings near Matagorda Bay was managed by an employee who always answered when asked, “Whose cattle are those?" that they were Mavericks. And so maverick came to mean free roaming cattle that had not been branded and did not follow their herd.

Today, the word maverick has become very popular. Not only does it apply to people, but the word is often used as a brand name such as Alpine's Maverick Inn, The Maverick Ranch RV Park in Lajitas and the Maverick Grill in Santo, Arlington, and Floresville. The Dallas Mavericks won the 2011 NBA championship by playing the maverick way. And Eagle Pass? Guess what? Eagle Pass is in Maverick County.

Those early settlers, those men of vision like Richard King, Sam Maverick, Oliver Loving and Charles Goodnight of the Goodnight Loving Cattle Trail, all left their mark on Texas. Can we live up to the heritage they left us? Or shall we just follow the herd?