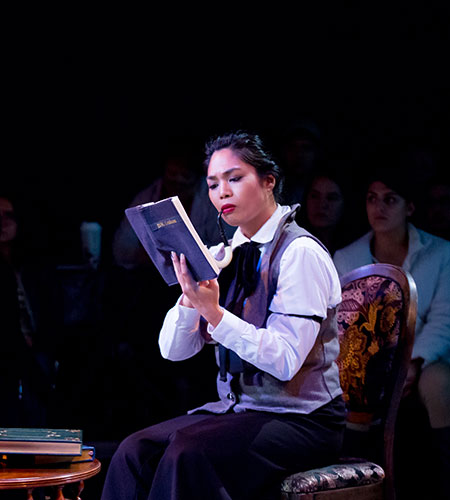 South Texas College Theatre celebrates their 10th anniversary with a season packed with classics and comedy. The Theatre invites the community to become a Season Pass subscriber for another year of fun and quality entertainment.

STC Theatre opens the season on October 17, at 7:30 p.m., with William Shakespeare’s The Taming of the Shrew. The opening production runs through October 20 and is followed by Rick Johnston’s farce comedy Cahoots, from November 14-17.

In the spring, the STC Theatre will sing to their hearts’ content with William Finn and Rachel Sheinkin’s musical favorite Cyrano de Bergerac, February 20-23. The 2019-20 season wraps up with the Cooper Cabaret – an event celebrating the theatre’s 10th anniversary by showcasing local talent May 2-5.

“We wanted to celebrate our 10th anniversary by returning to the classics and farces that were a part of our earlier production seasons,” says Drama Department Chair Joel Jason Rodriguez. “We have grown so much in the past 10 years and we want to celebrate and honor that by ending the season with the Cooper Cabaret.

“Our productions have always been a mixture of STC and UTRGV students, graduates, and community members, and we believe this is what makes South Texas College Theatre so vibrant and rich,” Rodriguez said. “What better way to end a season than to showcase the talent that brought us to where we are today?”

Season passes are also available, allowing patrons to attend all the productions and choose between general or reserved seating. All subscribers also receive special deals for any additional guest performances that may arise throughout the year.

For more information about STC Theatre, call (956) 872-2301. All productions will be held at STC’s Cooper Center for Communication Arts, located at the Pecan Campus, 3201 W. Pecan Blvd. in McAllen