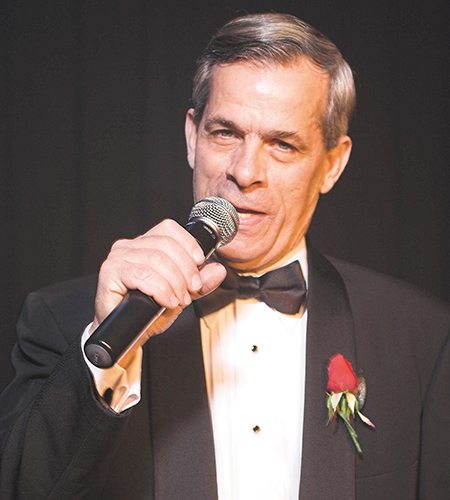 Ralph Kuster was born to perform. Not just to perform, but to also create relationships through his music with his audience.

The former Branson, Missouri performer, and current Winter Texan entertainer (also known as Wintertainer), has returned to the Rio Grande Valley with a variety of shows - including Christmas, a Tribute to Broadway and the Movies, Gospel Show, Country Classics, Sinatra, Martin and Friends, Elvis, Neil and Friends, a Valentine’s Show and a St. Patrick’s Show. He also has a show called Timeless Treasures that incorporates a little piece of all the other shows.

Kuster is a walking library of music, a virtual human radio station. His variety of shows is as wide reaching as the range of his voice.

“I’m motivated to touch the hearts of the audience,” said Kuster, who opened his Valley season with a Welcome Back Winter Texans Performance at Paradise Resort in Pharr. “A lot of the songs I perform bring back fond memories and portray a positive outlook to the coming days and upcoming season.”

But Kuster does more than just perform. He interacts with his audience in every show. For example, at his Christmas shows, everyone uses cheery holiday bells. He also puts together a video for all of his songs, touching the audience’s senses and bringing back even more fond memories.

He said that he hopes the work he has put into his videos will touch people’s hearts. That, he adds, is what he truly enjoys the most about entertaining.

“I’ve had such great audience responses,” Kuster said. “The response at the Welcome Back show was outstanding. It was a marvelous way to start.”

Currently highlighting his Christmas shows, Kuster said that he wants to bring out both the spiritual side of the holiday as well as the fun side. This year’s all new Christmas Show is a combination of country and traditional Christmas including many songs by Johnny Cash, Neil Diamond, John Denver and many more.

“The audience loves the videos for each song,” Kuster said. “It adds to the warmth and joy of Christmas.”

Kuster said he’s also available for a New Year’s Eve show, yet another set of songs in his ever-growing singing library.

For more information on Ralph Kuster or to book a show, call (417) 230-8198 or email ralphkuster@sympatico.ca.