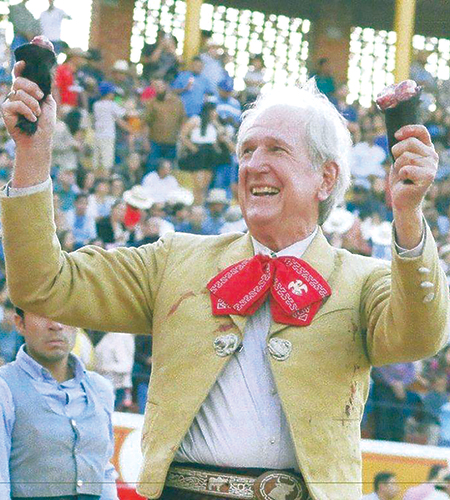 The Santa Maria Bullring will host only two events this year. The first event will be held on Sunday, January 12, with the second one on Sunday, February 16. Fred Renk will be retiring after these two events. Both events will star the world’s seventh female matador, Karla Santoyo.

Jim Verner, a special longtime friend of Fred Renk, will appear on Sunday’s card to honor Renk’s retirement from the world of bulls.

Jim could have been a matador by taking his doctorate anytime during his 60 year tenure in the bullfight world. He has a special talent in that he wants no credit for all the years he has performed in the bullrings of Mexico and Spain.

“It’s a special honor to take your place in the world of the Matador, and I have been honored to appear with many of the greats,” said Jim. “Being here with Fred Renk on this special day in honor enough after knowing him and performing for him here in La Gloria for the last 20 years.”

Life has a special meaning to Fred, who honors his son Matador David Renk “El Texano” on this day. David, who passed away in late 2018, was the only American Matador in history to confirm his doctorate in the largest bullring in the world – Plaza Monumental Mexico. It was in front of 47,000 fans that he was the sixth American matador in history to achieve the goal since 1902.

“It was an honor to know him and perform with him,” said Jim.

Karla Santoyo heads the card for the January 12th event performing with Cayetano Delgado. Both have performed at the Sant a Maria Bullring over the years. Karla, whose bullfight club is recognized by the American National Association of Bullfight Clubs of America, has a special meaning to Fred because he formed it and has represented the club throughout the US, Mexico and Europe.

Karla is no stranger to the fans in the Rio Grande Valley. She has appeared in four previous seasons and is a favorite of the Winter Texans. She is always available for photos before and after the event.

Her career has been one of fame and fortune in all her performances. Two years ago, she received a tossing that threw her high in the air, landing her on her neck. The throw forced medical attention that revealed a blood drain from her left ear.

She came through it performing one month later in the Santa Maria Bullring, wowing the crowd with a sterling performance dominating her two bulls. She continued her collection of symbolic ears and tails awarded by the fans that pleaded with the judge for more.

The beautiful young matadora is appearing all over Mexico and South America this year.

Joining her will be the dynamic trumfador of last year’s performances, Cayetano Delgado, son of the grand matador Enrique Delgado. Delgado was the compadre to the American icon Matador David Renk, “El Texano.”

Cayateno won the best in show during last year’s events and the Golden Bull trophy for a historic fight with the bull called “Gitano.” He just returned from a grand series of performances in Spain.

He is a classic matador who performs with sterling statuesque passes that literally make you tremble while watching his performance. Truly inspiring to watch.

The bulls are the famed ranch “El Sabinal.” They are all of the famed berendo color, meaning black and white coloring – and they are beautiful.

“In all the 20 years of events this promises to be the best Santa Maria has ever presented,” said Fred Renk, owner and judge. “These two events are in honor of my retirement.

“It has been a proud time and I am ready after 60 years of the bulls, to just be able to sit and watch. Don’t miss it.”

Entertainment prior to the bullfights will be provided by Mario Ordaz and his famous dancing horses. The famous Mariachi Memo Rodriguez’s Mariachi Rey Azteca will perform two hours prior to bullfight opener with the great voice of Alex Posas.

Tickets are taken by reservation by calling (956) 481-3300 and pay when you arrive. Food, beverages and music will be available.

Gates open at 1 p.m. the bullfights start at 4 p.m. The bulls are here for the public to see anytime. Bullring and cantina open daily at 2 p.m. Santa Maria Bullring is located at 4877 FM 1017 in La Gloria.