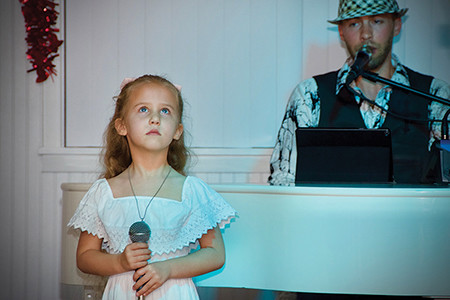 Jason Whorlow is in his fifth year entertaining Winter Texan. He has been nominated and won several awards during this time including Best Solo Variety Act of 2017 Valley Star Awards. As well as becoming in high demand for his extremely versatile, unique and interactive show.

Jason has crowds of over 400 singing along with his Sweet Caroline, with hands raised in the air and couple dancing to I Can’t Help Falling in Love and Unchained Melody. Winter Texans have enjoyed his energetic performances of Jerry Lee Lewis, Billy Joel and Elton John as well. Whorlow enjoys playing to a laid-back island crowd with songs from Kenny Chesney, Floyd Cramer, Zac Brown Band, Otis Redding, Jimmy Buffet and so many more.

Whorlow prides himself on his ability to effortlessly enjoy each and every performance on account of the passion and drive he has to be living out his dream as an entertainer.

Once again, this year, Whorlow will be featuring his young daughter at certain shows with songs from “The Greatest Showman,” Alison Kraus, Linda Ronstadt, Anne Murray, Dolly Parton and more.

Whorlow will be performing at over 40 venues this 2020 season. You can also experience him on his website at whorlowentertainment.com.

Contact Whorlow at jasonwhorlow@gmail.com or find a flyer at one of his events for his full schedule.