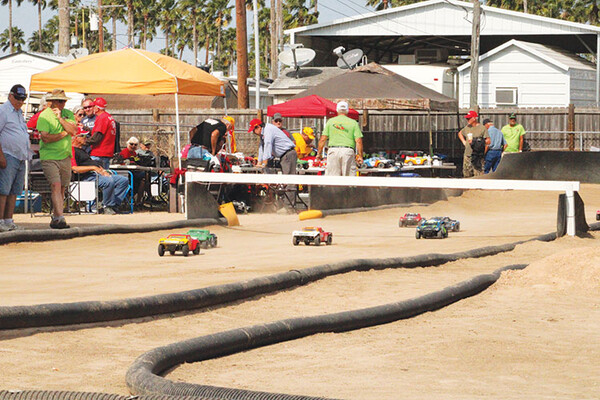 There’s a substantial bit of racing in the Valley.

“I don’t think anyone, anywhere in the country races any more laps than we Winter Texans do … That means more races and more laps,” Fleming said. “This allows you to get a lot of experience and a good chance to develop your skill set.” 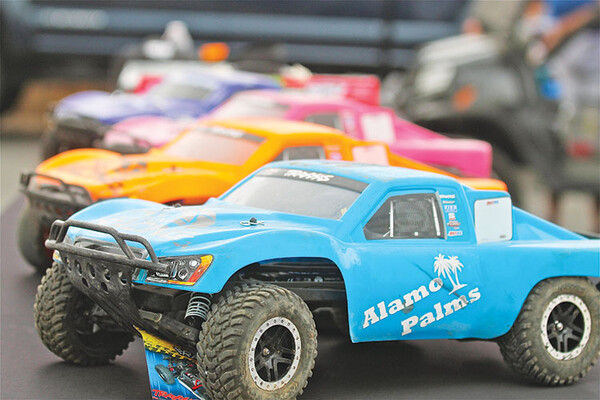 In the Valley, RC racetrack building and the addition of radio-controlled activities haven’t slowed.

“Now almost every time I pass an RV park, I see an RC racetrack that wasn’t there before,” ARVP racer Mike Benoit, said. “They’re popping up everywhere.”

However, racetracks in the Valley were at one time limited to the Harlingen area.

The first known publicly run RC track in southwest Texas was an off-road gas 1/8th scale track that was built in Harlingen over 40 years ago, according to Jerry Lewis, a long-time pro racer. He now runs the radio-control racing program at RGV RC Raceway in Harlingen.

The very first RC track might have been the one Lewis built.

“Holy Cow! I’ve been in racing for 50 some years,” Lewis said, reflecting on his racing past. “I believe I built the first off-road track in my front yard. We ran it for four or five years until my wife made me close it because it was taking too much time away from our family.” 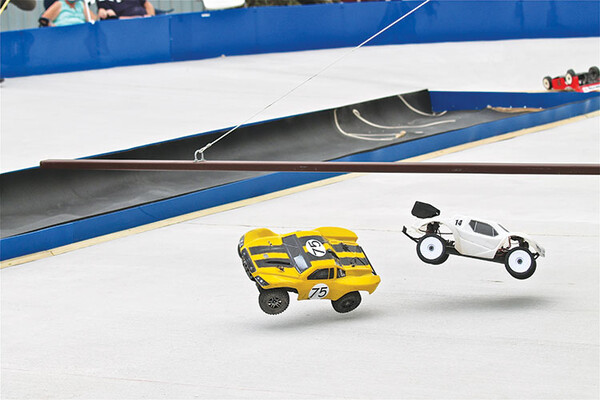 The 2005 RC Off-Road Nationals, held at the Harlingen’s Fair Park facility, drew over 200 competitors from as far away as China and the Philippines.

He said that racing in the Harlingen area was thriving then. For seven or eight years off-road racing was featured during the city park’s Rio Fest in the 1990’s.

“That grass racing event was like Tulsa, Oklahoma’s Chili Bowl,” he said. “They came from Houston, from all over to race.”

The city gave the racers a patch of grass for their course at this festival-like event.

“We took lawn mowers out there and cut the grass all the way down to the roots and then we raked up the grass,” he said, describing what went into preparing for the annual race.

“We actually cut out a track in the middle of the grass,” he said, “Then we put some pipe down, and we ran our electric cars on grass.” 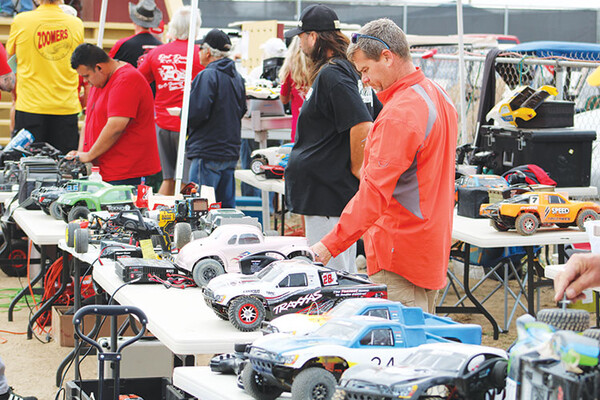 He said people loved racing on that unique surface.

“You take your car and put it on grass,” he said, “and they’re popping wheelies and everything else because there’s so much traction.”

The only issue was the car’s battery life, which Lewis described “as only lasting four minutes ... if you were lucky because we didn’t have lipos back then.”

Because the races were so short, no one could afford to make a mistake, he said.

“The t-shirts we made up read: We did it in the grass for four minutes,” he said. “They were really popular.”

Lewis sees the sheer number of tracks in the Valley as an indicator that there is a resurgence of racing here. He’s hoping that there’s the possibility that all RGV racers can get together at one big event. 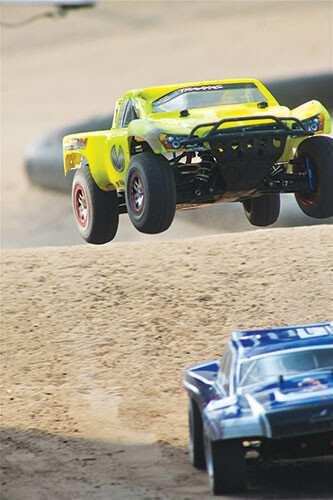 The first off-road track at a Winter Texan park in the Valley was built at Penitas RV park over 16 years ago by Jack Westcott and a group of racers in Penitas.

At one time he said they had 10 to 20 Winter Texan parks racing there.

“We’re the only park that uses handicap racing,” he said. “I figure out the averages every week. We drop off one week. Then we add the last three weeks that they race and that’s their handicap.”

Numbers around the track indicate where the racers start. That way, he said, the beginning racer has a chance to win.

“It takes me six hours every week just to figure out handicaps,” Westcott said. “But it gives everybody a chance to win, just like bowling is handicapped.”

An octogenarian, he said the track will keep running as long as he can walk up and down the steps [to the drivers stand].

He likes the fact that so many new racetracks have been built in the Valley. He wishes that were true all over the U.S.

“Many tracks up north have closed,” Westcott said. “I take my love for racing back to Minnesota with me, and I try to find a track there in the summer.”

While RC off-road tracks were attracting a following in the Valley, it wasn’t quite what two Alamo Rec-Veh Park friends -- Doug Kortbein and Mike Benoit -- wanted. 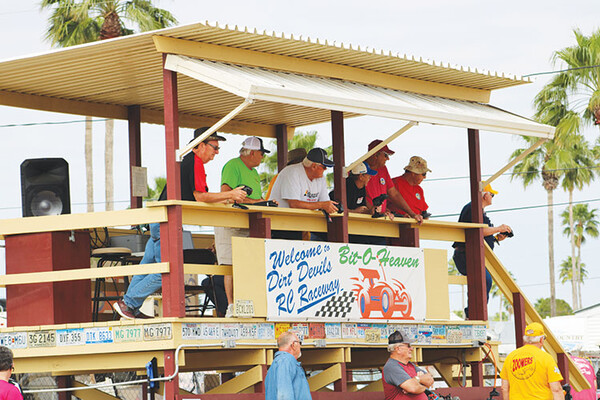 “I’m an old guy,” Kortbein said. “I think it’s easier to race on an oval track than off-road because your reflexes don’t have to be as fast.”

In the fall of 2014, they got their park manager’s permission to build a track where the park’s unused horseshoe pit stood.

Kortbein and Benoit designed and supervised the new track’s construction.

The park’s owner sent over his backhoe to dig out the pit.

“We were quite frugal,” Kortbein said. “We used almost everything from the horseshoe court. All the wood was there for the backstop, so we used it to build the driver’s stand. Meanwhile, we worked to pay for most of the track’s expenses ourselves with fundraisers.”

After the track was complete, he said they didn’t have the lap counter they do now.

“People in the stands would keep track of each racer’s progress with flip cards,” he said. “Them were the good old days!”

“Many flip-card helpers were mad when we got the automatic system,” he said. “They lost their jobs.”

He said today they have drivers who come to the Valley from all over Texas and that means there is good competition here.

“Almost all parks with oval tracks came to our park to copy our design or we helped them work out the plans for their track,” Benoit said. “We assisted many with their race programs because we want great tracks that offer good competition. We’re still ready to help any park get started.”

To kickstart the race program in Alamo, the duo also initiated the Red, White and Blues Series of races that promoted racing among parks.

With the expert help of track builder Jim Davis, it became a reality.

RC director Mike Fleming said he gave Davis the design, which he had matched to the size of the existing drivers’ stand. His computerized drawing included the track’s length and radius.

Davis analyzed the printout and agreed it could be built.

“We took what was available to us,” Fleming said. “Amazingly, it worked!

The first concrete track was built in the center of Ranchero Village to impress visitors when they came to the park and to attract new residents.

“The new people, mostly RV’ers, like looking at the impressive track,” year-round resident Jerry Dobson said. “Several of us RC Club members let them drive our cars so they get some practice. They get addicted once they try it. Before long they want to spend the money to get their own cars.”

It took some planning and quite a bit of money to get the park’s second track (concrete) completed.

Dobson said that the owner and park manager got together and decided they wanted a track that was low maintenance. One of the requisites was that the track use every bit of space possible.

“RC Club members told them what we wanted,” Dobson said. “Our general manager raced with us, so he knew what he wanted.... He wanted the fastest, greatest and biggest track. And he got that!”

Most park racers like racing on the new surface.

“It’s much faster, like Nascar on cement instead of dirt,” Jerry Harbarth said. “You can go a lot faster without spinning out. I like it!”

According to Dobson, if a park has good ownership and a manager behind its RC Club, the residents have it made because it’s an activity that Winter Texans can get into fairly reasonably.

“I’ve lived here for four years, Dobson said, “and during that time RC activity has mushroomed.”

He thinks RC racing has a good future, whether it’s a concrete track or another type.