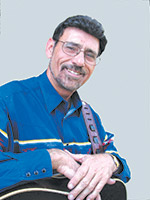 Not long after moving to Music City, Terry began recording his own songs, and to date has released fourteen albums of original material. His most recent project, “Ten Miles East of West” was recorded in Music City in January of 2018 with A-Team Nashville musicians.

Whether performing by himself with only his guitar—as he frequently does in churches and smaller venues—or with a band, Terry fills his shows with a heavy dose of his original songs mixed with standard favorites. His humor, his stories about songs, and the various kinds of songs he sings give audiences an emotional roller coaster ride, often laughing during one song and crying the next.

The motto of the national Songwriters Association is, “It all begins with a song.” Terry strongly believes that a performance is all about the song. When performing with a band, he frequently reminds them, “It’s not about me. It’s not about you. It’s about the song! Let’s have fun during this show. But let’s not do anything to damage the integrity of the songs”.