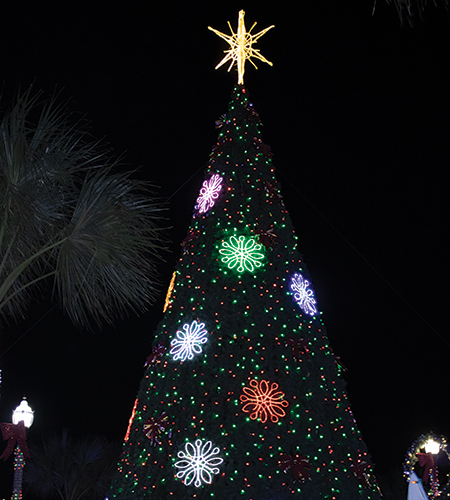 Whether you take a train ride, pose for a picture with Santa, enjoy a fresh made treat from the market, or just enjoy the many light displays, there is plenty to do and then some at the Hidalgo Festival of Lights.

I arrived before the sun went down, so I walked around once to look at everything, getting a feel for the layout and themes, planning pictures to take once everything was lit and in full swing. Of course, the center of the festival grounds is the focal point, where there’s a towering Christmas tree decked out in lights and ornaments. The surrounding main area forms an oval, with entrances at one end and a stage with seating in front of it at the other. Off to the left is the market, and the right side has the train station where there are two trains ready and waiting for passengers to pile on for rides that will take place throughout the night. All along the nearby streets and sidewalks are even more displays of lights and statues with all sorts of different themes, from the Grinch to Frozen to Toy Story.

Soon the dusky sky started to dim making the lights and colors pop so I could really appreciate what the festival had to offer. It wasn’t long before there were cars parked along the street bumper to bumper and wherever else a spot could be squeezed in, seeming like everyone had the same idea of getting to the festival shortly after the 6 p.m. start time. 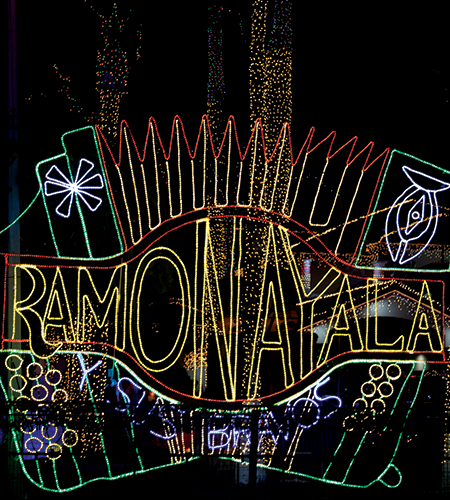 The area was quickly alive with lights and life. Family’s posing for pictures at the entrances, kids running straight to displays with their favorite characters, and vendors setting up at the market. Every now and then the train would pass by going along a route that took passengers by and through every display. The stage held performances periodically, otherwise holiday music could be constantly heard coming from the speakers surrounding it. In the distance I could also see a ferris wheel, and a merry go round, that had a constant stream of riders, but I prefer to stay on the ground, so I didn’t try that out.

I’m not sure how many times I walked around the festival grounds, but every time I did, I noticed something I hadn’t before. Numerous different set ups to admire and take pictures of, the dark night sky being a perfect backdrop to the hundreds and thousands of lights. Many others were also taking pictures wanting to capture as much as possible of the festivities and surrounding aesthetics. Overall my favorite displays were probably the Star Wars and the Dr. Suess themed ones, as well as the World’s Largest Killer Bee donned in a blanket of Christmas lights.

Another favorite was definitely the market where the smells of fresh doughnuts and tacos drew me in. After a quick look around I decided on a sincronizada which was a perfect snack after all the walking I had done. There’s no shortage of vendors selling cookies, pastries, and almost endless other homemade sweets and treats. As well there are also accessories like bags and purses for sale, but I mainly focused on the food.

When I finally left there were still people coming in, joining the crowd that flowed from one area to the next. Train rides regularly ran as the lines continuously grew and shrank with eager patrons. Santa also had a steady stream of excited children patiently waiting to take pictures with him and relay any wish lists they had in mind.

All these sights can be seen and enjoyed for yourself from 6 to 10 p.m. until December 30th.

Hidalgo Festival of Lights is located in downtown Hidalgo in the front of the Hidalgo City Hall, 704 E. Ramon Ayala Drive. For more information and a full schedule of events, visit their website online at hidalgofestivaloflights.com.