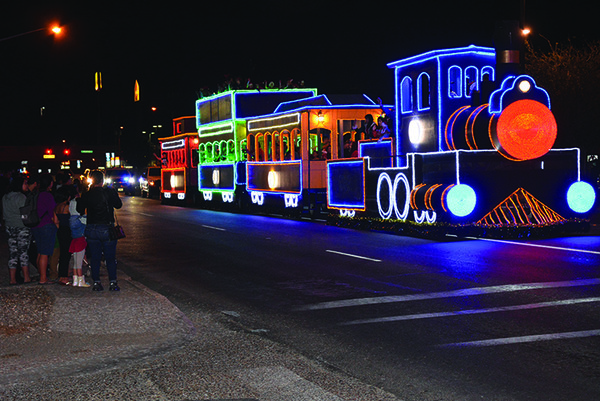 As entertainment drew to a close, Vela noted this year’s parade, with the “Candy Land” theme had 41 entries, which was more than in the past, and a few more student groups took part in the entertainment this year. “I am really happy with this year’s outcome, which went off virtually without a hitch,” he added.

Newly elected Alamo City Commissioner Oscar Salinas came for the first time even though he lives only a few blocks away. “I was very surprised on the great turnout (of people) and we had good weather to boot” he said. He went on further to state, “It was an awesome event.”

Alamo Mayor Diana Martinez, who rode aboard the big City of McAllen train with other commissioners, John McKeever Elementary School students and Alamo Youth Center kids, agreed that “it was a great parade.”

This marked the third year that McAllen has lent the train to Alamo. She thanked the sister city for providing the train and staff to run it. “I am proud to say that Alamo and McAllen are the only two cities in the Rio Grande Valley that for the past seven years have been recognized by Kaboom, Inc. as a “Playful City USA Community.”

The mayor noted she has been in every one of the illuminated parades and recalled how the parade has grown in size over the past 10 years. It has gone beyond the fire trucks, police units, a couple of floats, a few school groups and a band.

She credits much of the success to Robles, who picked up on the parade and tree lighting event when he came to Alamo from the City of Hidalgo seven years ago. Robles used some ideas from his previous employment, adding lights to the lower part of trees in Central Park and initiating the large 4 by 6-foot plywood Christmas cards contest created by different school classes, which went on for several years. A few of the cards from the former contest are still being used in the park.

Vela noted that the west side of the park was an all-new “Candy Land” display with gingerbread cookies, a couple gingerbread houses, a large snowman and a vehicle with cutouts for visitors to place their faces for photos.

But the best tribute to the event’s success was the happiness on the faces of the children along the parade route and among those students taking part in the parade, riding on the floats and others walking like the school cheerleaders and pom pom squads.

Royalty abounded. On hand was Miss Alamo 2019 Daniela Zapata with her entire court, Princess Gabriela Salinas, Duchess Fatima Ruiz and Ambassador Vanessa Diaz. Plus, there were a couple Picture Perfect and RGV Cinderella title holders along with Miss South Texas. 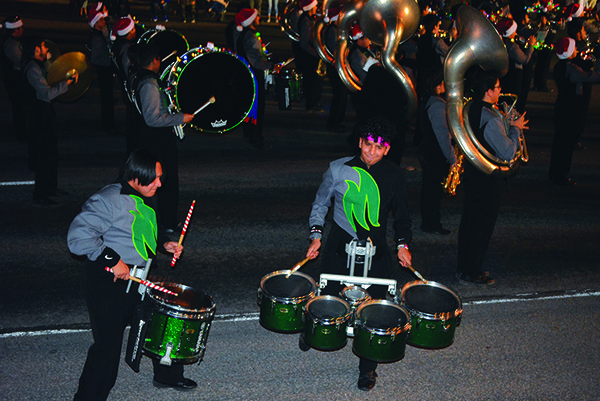 The Mighty Wolverine Marching Band from PSJA Memorial High School provided music along the Alamo Road and Business 83 route to downtown Central Park. Once the parade ended at the park attention shifted to the tall darkened Christmas tree on the plaza area. It wasn’t long before a 10-second countdown began with Mayor Martinez again doing the honors of pushing the button that lit up the several hundred white lights.

The School choirs, dancers and cheerleader squads from John McKeever, Marcia Garza and Zeferino Farias Elementary Schools, Audie Murphy Middle School and Vanguard Mozart Academy were part of the on-going tradition started by Robles to expand the special evening event with entertainment since the schools were already in the parade.

They took to the stage this year to present the magic of a “Candy Land” night of music, much to the delight of an audience of parents, Winter Texans and Alamo residents. One of the cutest was the young costumed Dazzlers Dancers from McKeever Elementary doing the well-known “Dance of the Sugar Plum Fairies.”

Nearby youngsters were having their picture taken with Santa Claus who was one of the first in the parade lineup to arrive at the park. Some of the kids were joined by their parents and family members for a group picture with jolly old Saint Nick. The Alamo Fire Department’s little truck also drew families for photos.

Families wandered through the Candy Land park following the entertainment, enjoying the fun evening that was blessed with such pleasant weather.