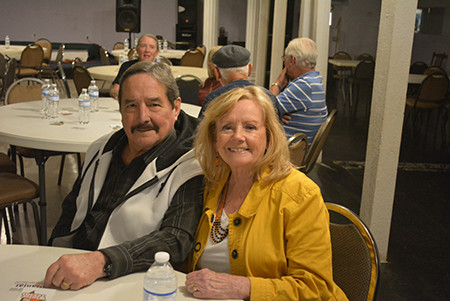 About 90 local Winter Texans were treated to an evening of food, information and entertainment, with many winning prizes in a series of drawings at the Monaco Event Center in Alamo on Thursday, March 27.

The occasion was the Alamo Chamber of Commerce and Visitor Center’s Winter Texan Appreciation Night, which is a popular event for Jim and Jean Zion to attend. This was about the fifth or sixth time the Zions had come to the event. This is their fifth year at Alamo Rec-Veh Park, but they have been coming to the Valley for 15 years from their home in Missouri.

“We like to be supportive of Alamo,” Jean Zion said. Her husband added, “I’m appreciative of the (Alamo) police. They are really good,” noting too that the animal control division is on top of picking up stray dogs and cats in their park.

The Zions were at the annual event with their friends, Don and Tonnie Grunder, who stay at Quiet Village II in nearby Donna. They live near Wichita, Kansas and started coming to the Valley in 1999.

“We have been in a lot of different parks and loved them all,” Don Grunder said. “I like the treats,” his wife claimed, which attracted her to the chamber event.

This was the second time for Rick and Mary Munoz at the appreciation night, which was the first one planned indoors. They live in Oklahoma, and it was their long time of RV travel that led to coming to the Valley. They were told about the Valley during a stay in an RV park near Tulsa, OK, from an older couple who had been here.

“We scouted it out thoroughly,” said Rick Munoz, who was in the airline industry with Eastern and then with American Airlines. “And there are more RV parks than I imagined.” His wife, who is a registered nurse, loves the friendliness and amenities she found at Alamo Palms Mobile Park, where they have stayed for the past six seasons.

Short talks were led off by Fire Chief Roy Contreras, who helped arrange the event. He told a bit of his years with the department and invited the winter visitors to make use of free inspection services. Interim Police Chief Roy Alaniz also spoke, offering help if needed.

Chamber of Commerce officials Melina Lerma and Gloria Espinosa added their greetings to the Winter Texans. Program Coordinator Karen Arenas noted the materials available at the Chamber office and directed the giving out of the drawing prizes, with the pageant royalty acting as runners.

Entertainment was provided by standup comedian Rick Cano, who said he had been up north like the audience. He was as far north as Edinburg.

Having the first appreciation night inside instead of previous open-air events took the weather element out of the picture, noted Contreras. The fire chief said the change was made possible by local businessman Robert Acosta, who offered his event center and also provided much of the food for the occasion.