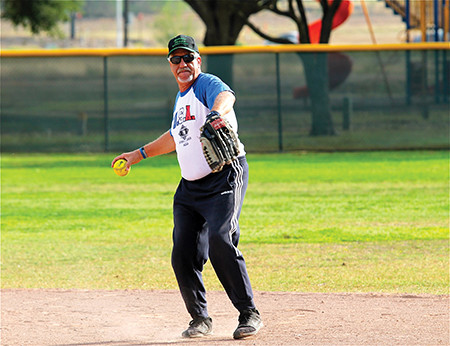 Excitement buzzed throughout the bleachers, in the dugouts and on the field as the U.S. loaded the bases with one out and were down by one run in the bottom of the eighth inning.

It was the first of two games in the annual U.S. versus Canada Senior All-Star Softball Game at Westside Park in McAllen. The U.S. had taken a commanding lead during the first half of the game, but Canada worked its way back. Doug Scoville put the Canadians in the lead in the top half of the eighth with a double and now the Americans were trying to win a thriller of the game.

They came up just short however, turning a double play. Scoville was part of the last play as well at second base. 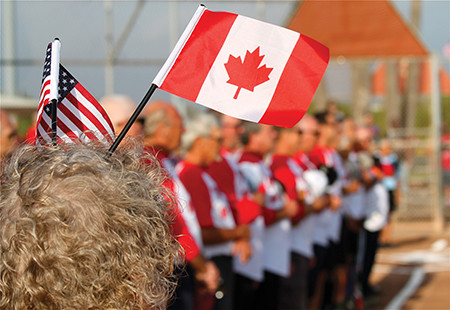 It was quite a game and quite a day for Scoville, who took over organizing the games from Ed Martens, who retired from the tournament director spot after more than 20 years. The second game wasn't quite as suspenseful as the Americans scored big and didn't allow the Canadians back in the game en route to a 10-run rule victory.

“The game was just a perfect script, to win by one in the eighth,” Scoville said. “It was dynamite for the fans and for us too. The suspense was just great.”

More than 300 fans and approximately 400 people overall, enjoyed perfect weather except for a few gusts of wind here and there. Fans came with their country colors on, and many wore small flags in their visors or hats supporting both countries. 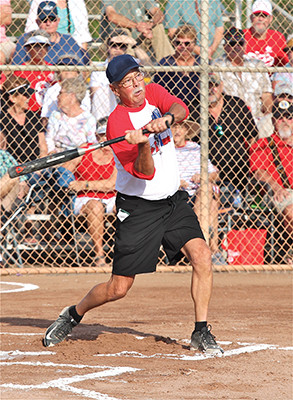 “Marilyn (Doug's wife) and I recognize this for being more than a softball game; but for what it brings together too,” Scoville said. “It allows me and so many others to stay active for one, and for another there were Canadians, Winter Texans, Mexicans, locals all on the teams just having fun.

“When we're out there playing ball, all the rest of the world and its problems disappear; it's so positive in that respect.”

Doug and Marilyn are from Lunenburg, Nova Scotia, a 2,800-mile trip to the Valley. There wasn't the infrastructure in that part of Canada to play high school baseball/softball in Nova Scotia when Doug was in school. Now, he's making up for that time and enjoying every inning and every pitch.

“Your high school stadiums are as big as our University stadiums,” Scoville said. “Once we left Little League, that was about it for us. When slow pitch came around, it was a Godsend for those in their 30s, 40s or older. Everyone is involved in the game. If you're in the field, it's not like you're watching a pitcher throwing fastballs. It's a great activity and the City of McAllen did a great job setting up extra bleachers, making sure the field was Grade A-1 and helping out so much.

“We had probably 15 sponsors, the response from anywhere we went was unbelievable.”

Even a member of the Canadian Parliament got involved, sending a Canadian flag and more than 100 Canadian pins that the Canada team gave to the American Team. State Rep. Sergio Munoz also got in on the action, donating a large Texas flag for game day flying.

“This is our first year to organize and we didn't have any history,” Scoville said. “We couldn't believe the response and interest. It's a good news story. We don't know how far it's gonna go but we're looking forward to it.”