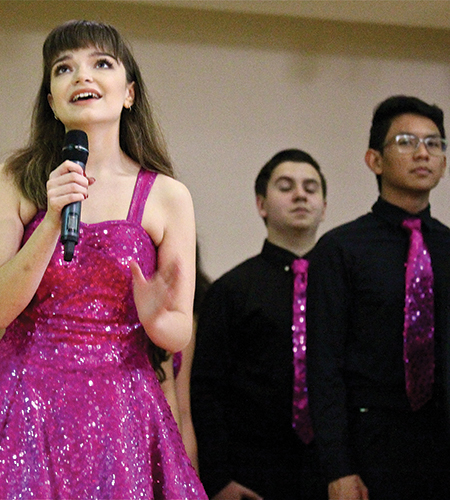 What happens when wishes are granted; when people’s fantasies become fiction?

In the upcoming Razz Ma Tazz performance entitled “Into the Woods,” several scenarios will be explored. But before the McAllen Nikki Rowe sing and dance group flies off to fantasy land, they still have some Christmas cheer to spread. And very few high school groups in the Valley can do it as cheerfully as Razz, a group made up this season of 20 incredibly talented high school students.

The group is well known for taking their Christmas show on the road to Winter Texan parks and resorts all along the Valley. As one group of seniors graduate, another group of first-year participants, many of them a little shy after reaching such heights, step into place.

As with other extracurricular groups from sports to academic groups, the bonds within these groups are what keeps them going.

“The Christmas show is a high energy show with 20 students involved,” said director Joshua Watkins, who started with the program in August and the group immediately began rehearsing. “They are very polished for this part of the season.”

Songs such as “Merry Christmas Darling,” “Baby it’s Cold Outside” and “Come Home for Christmas,” are just a taste of the fun holiday tunes the group, which has been performing for 29 years, brings onstage.

“There’s quite a bite of harmony that sounds excellent,” Watkins said.

The group also has pieced together some medleys that are quite entertaining. “Swing Into Christmas” is a three-song piece that includes parts of “Silver Bells” among other songs.

Everything builds up to an energetic and exciting grand finale, a medley of a dozen or so songs in an arrangement called “Boogie Woogie Santa Claus.”

Right after the big finish that marks the end of the season, Razz will dance their way onto “Into the Woods.” Unlike the Christmas show that goes on the road, these performances will take place at Nikki Rowe High School Jan. 18-21 and Jan. 24-25.

“It’s a mishmash of several different fairy tale characters like Cinderella, Little Red Riding Hood, Rapunzel and Jack and the Beanstalk,” Watkins said. “It interweaves all the different story lines in a unique way where each character has a wish they want. That’s the first act.

“In the second act we see what happens after they get their wish. It goes from a Fairy Tale to reality. It’s very unique.”

Tickets are still available for “Into the Woods.” Call (956) 632-5152 for more information or visit RoweTheatre on Facebook.