Dave and Daphne are here 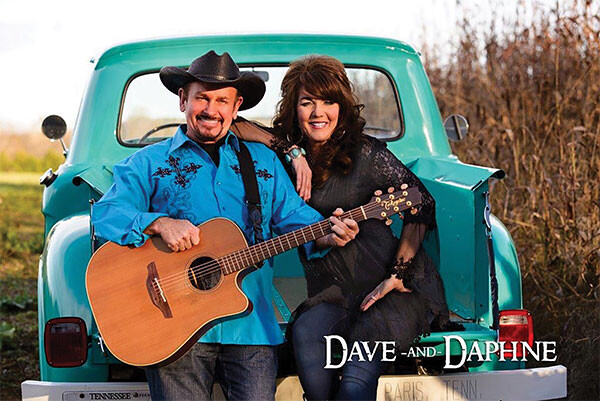 Dave and Daphne are here again. This couple loves to entertain and you can see it when they get on the stage. This group has won a couple of Valley Star Awards including Duet Musical Group of the Year, and in 2019 they won Entertainer of the Year.

Once you see them on stage, you know they earned those titles. Their shows are full of laughter, tears, and a pull back in time with their classics and banter. They sing a little bit of country and little bit of gospel.

Dave, who once toured with Barbara Mandrell, is known for his incredibly fast playing, impressing audiences with his skill by playing tunes such as “Flight of the Bumblebee,” and the “William Tell Overture.” He also does a mean Willie Neslon impersonation.

Daphne is the perfect complement for the duo with her powerful and beautiful voice that demands attention. She also has a sweet, tender voice that will touch every soul in the house. She also does a mean Dolly Parton impersonation.

Dave has performed for presidents at the White House and has appeared on countless TV shows. Toy Clark proclaimed him as one of the most fabulous guitarists on the planet.

Daphne has toured with some of the greatest Southern Gospel Music groups of all time including the Bill Gaither Group, The Florida Boys, The Cathedrals, Rex Nelson and others. The Southern Gospel Music Association voted her their Female Vocalist of the Year. Her impressions of Tammy Wynette, Patsy Cline, and Loretta Lynn are spot on.

For their full schedule with times, or to book them, visit www.daveanddaphne.com, call (615) 400-4939, or email oprywest@comcast.net. You can also find them on Facebook.