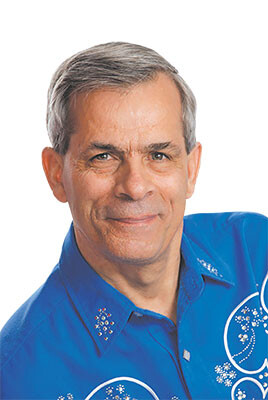 Ralph Kuster has been a Valley favorite for several years. He is well known for his variety of acts, wide-ranging vocals and the energy he puts into his shows. With what he does now, you would not believe that he spent many years teaching golf.

When not teaching, he could be found singing something in his car, in his room, or anywhere else he had a chance to sing. His love for singing eventually led him to pursuing a career in music in 2005.

It was in 2006, performing in Nashville, where someone told him he needed to go to Branson. He later found out that someone was a member of Toby Keith’s band.

Once he got to Branson, he created his own show and rented his own theater, paying for all the expenses of running a show. It was a struggle, he said, but he kept going. By 2008 he had a leading one-man show in Branson.

In 2012 he was encouraged to attend the RGV Showcase by Wade Landry and has been visiting the Valley every winter since. Starting with just four shows the following year, Kuster has found he loves the area and loves the people.

Now, after chasing his dream, he has been able to find some success and lots of joy in what he does.

He has a passion for music, performing, and touching hearts.

“I want to use my voice to touch lives. I put my heart and soul in every song, in every show.”

While he has a library of songs he can perform, he says it is impossible to mimic voices such as George Jones and Frank Sinatra. There are very few entertainers he chooses to mimic, instead he interprets each song with his own voice.

Kuster has 10 two-hour shows that he performs. Each show has a video presentation for every song that his sister and brother-in-law have worked to create. He can also tailor a show to meet specific musical and time-restricted preferences.

His shows include a Valentine’s Show, Timeless Treasures, Tribute to Frank Sinatra and Friends, Tribute to Elvis, Neil and Friends, Classic Country, Broadway and the Movies, a Variety Show, St. Patrick’s Day, a Tribute to Veterans, and other holiday shows.

He will be performing at the Gospel Fest with Lindley Creek, Rusty Rierson and Absolutely County, Definitely Gospel, and other shows in the Valley.

Kuster is available for bookings and can be reached at (417) 230-8198 or at ralphkuster@sympatico.ca.