The McAllen Holiday Parade organizers recently announced more exciting news to celebrate the Christmas season in the official South Pole of Texas, this time with a Rio Grande Valley musical spectacular that will air across the country. A line-up of 13 of the region’s top high school marching bands from McAllen, Donna, Edinburg, La Joya, Pharr, and Santa Rosa will be “Rockin’ Around the South Pole” as they perform in this year’s parade line-up.

For parade organizers, the inclusion of the high school bands is more than just entertainment; it is to promote music education and the opportunities that performances like the McAllen Holiday Parade bring. This year’s band line-up will include the award-winning marching bands from McAllen I.S.D.; Donna I.S.D.; Edinburg Consolidated I.S.D; Pharr-San Juan-Alamo I.S.D.; La Joya I.S.D.; Santa Rosa I.S.D.; and Valley View I.S.D. who will all be performing. 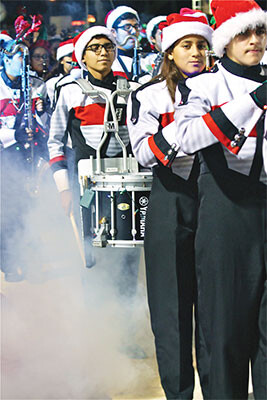 Thanks to its partnership with Telemundo 40, the McAllen Holiday Parade, will help bring the McAllen Christmas spirit to a national Hispanic audience in the top 31 markets for TeleXitos, a Spanish-language network channel owned by the Telemundo Station Group. The network will air the multiple international-award winning parade on Saturday, Dec. 25, at 12 p.m. CST.

The actual event will step off at 6 p.m. on Saturday, December 4, from the McAllen Veterans Memorial Stadium, 2001 N. Bicentennial Blvd.

There are still a lot of other ways to watch the McAllen Holiday Parade live, including VIP Stadium seating and various parade route seating along Bicentennial Blvd. To purchase VIP stadium tickets, visit at www.ticketmaster.com or at the McAllen Performing Arts Center Box Office or at any one of the McAllen community centers, including Lark, Las Palmas and Palm View.

Parade route chair tickets are also still available for purchase at any one of the McAllen community centers, for only $10.

Celebrities Mario Lopez and Julian Gil will serve as co-hosts for the parade.