Blankets for Veterans spreads to Valley 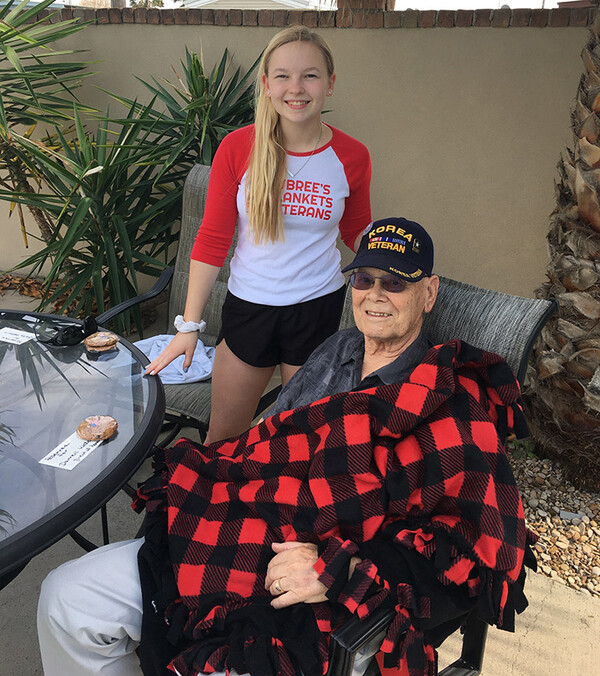 Blankets for Veterans, a non-profit organization created by a 17-yr-old in Wisconsin, has made it to a local Valley Winter Texan park this season. Park resident Kathy Hanson is the proud grandmother of Aubree Leitermann, the founder of the organization. Leitermann, who visited Heier recently, was able to give some of the blankets that were made by Heier, and others, to Veterans in the park.

Speaking of Leitermann, Hanson says she has always been interested in how people were making big differences doing small, simple good deeds.

In, 2014, Leitermann’s aunt worked for an air medical transport company, and told her about older Veterans being transported to their homes. Her grandfathers were veterans serving in the Army, Navy and Air Force. She felt even though she was ten she could make a difference. She took her savings and made tie blankets for her aunt to give to the Veterans. Her mom posted her good deed on Facebook.

Instantly, friends of her mom wanted to donate money so she could keep making more blankets to give to Veterans. The more people that heard about what she was doing, the more they wanted to help.

In January 2015, the first community blanket making event was held. People came together to make 70 blankets in just two hours. An event is now held every year in her hometown. Money for the blankets is donated by Veteran groups, companies, individuals and even veterans who received so that more veterans get blankets.

Aubree has received several awards including ones from Wisconsin governor’s wife, Obama, and will be receiving an award this year from Biden for her numerous hours of service recognizing Veterans.

The blankets are made of two separate pieces of fleece, one- and one-half yards. They are matched up and a 5X5 piece of each corner is removed and one-inch slits are cut around the blanket. The matched lengths are tied together around all four sides melding the two together in one blanket. No sewing is required. It takes one person approximately one- and one-half hours to complete a blanket. 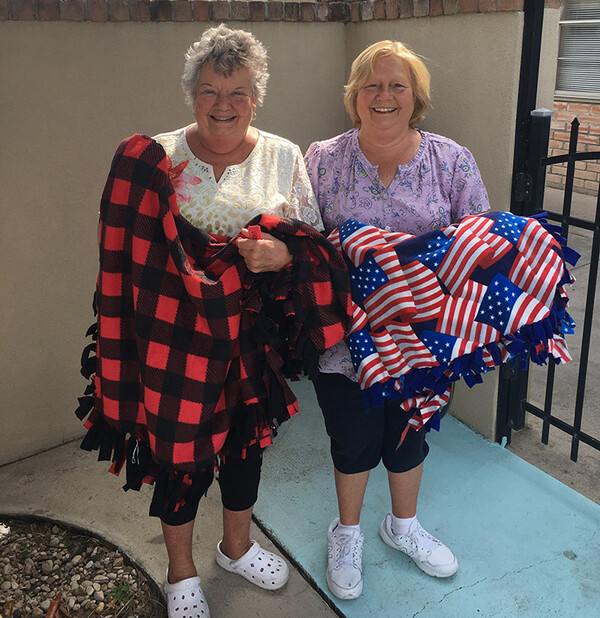 Due to COVID, this year’s blanket making event on February 28th was done virtually on Zoom allowing her grandmother Kathy Hanson and Great Aunt Judi Jansen to attend as Winter Texans at Autumn Acres in Brownsville. Grandma Kathy missed attending the event when she became a Winter Texan in 2020.

It makes Aubree happy to see the smiles on the Veterans, said Hanson. It makes her feel connected to Veterans that served long before she was born and gives her and others a chance to show their appreciation to those that served.

Autumn Acres allowed Aubree to present Darrel Waters 91, who served in the Army from 1951-1954 and Darrel Hoffman 91, who served as a Marine from 1952-1955 with the blankets made by Winter Texans grandma Kathy and Aunt Judi on March 30 while visiting on her Spring break.

The ladies hope to gather again next year to make blankets again here in Texas when Aubree is hosting her blanket making event in Wisconsin.

Each blanket has a tag attached that says, “Thank you for your service to our country. Here is a small token of appreciation for you to enjoy.” The tag is also signed by everyone who helped make that blanket.

You can check out Aubree’s Facebook page “Aubree’s Blankets for Veterans” for more information or to make a donation.