Students, faculty and staff at STC team up to study and find solutions to deadly bird to glass collisions 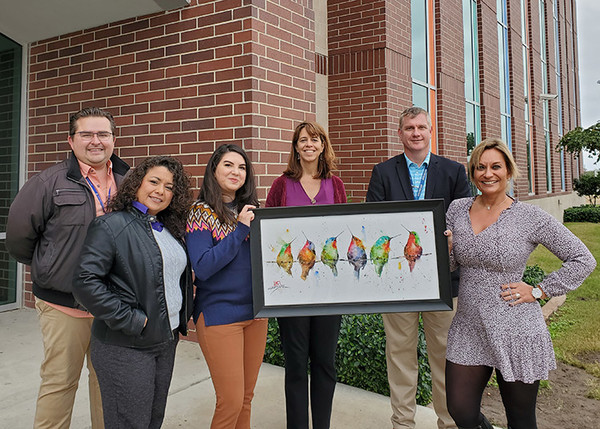 In 2017, a new architectural gem named the North Academic Building, also known as Building P, was built on the South Texas College Pecan Campus. With its modern design, impressive three stories, and welcoming atmosphere, it became a popular hub of campus activity. However, its substantial iridescent plate-glass windows and impressive height began to attract an unexpected type of attention.

Seemingly without explanation, birds, sometimes more than a dozen a day, were striking the tall windows and dying upon impact. This phenomenon was alarming, to say the least, and especially concerning for those who worked and studied in the building on a daily basis.

Students, faculty and staff from a variety of disciplines and departments soon teamed up to study the situation and find solutions.

“Texas is very rich in bird species, both local and migratory,” says Dr. Ruben R. Garces, a biology instructor at the Starr Campus. He has an interest in birds and was part of the team that worked to stop the accidents from occurring.

Dr. Garces says the Rio Grande Valley sees a large number of birds flying through in different seasons of the year simply because of geography. The region is located beneath a major migration corridor known as a flyway.

The Texas Parks and Wildlife Department says some 615 species have been documented across the state, 333 of them migratory, meaning they’re flying through on their way to North America, Central America or South America. The species range in size from tiny hummingbirds to the turkey vulture, which has a wingspan of up to 6 feet.

“Most birds won’t fly over the sea, and most won’t fly over deserts because there’s nothing to eat,” says Dr. Garces. That means many of them end up on a path directly through the Rio Grande Valley.

The location and the three-story building’s plate glass windows made an unexpected — but deadly — combination.

“It’s not surrounded by other buildings,” said Dr. Maria Cervantes, chairman of the biology department. “All of the windows are reflecting sky, unlike the other buildings. The birds kept flying straight into the windows because they’re so reflective.”

While birds hitting the glass of modern buildings is a generally common problem nationwide, usually little more is done than having personnel sweep up the fallen creatures. South Texas College was adamant that they had to do more.

“Given that our home here in the Rio Grande Valley is a major bird migration corridor, we at STC have a duty and an obligation to protect our precious bird species,” says Dr. Lydia L. Bean, a geographer and environmental advocate from the education department.

She and Andrea Fuentes of the speech department began logging the number of birds killed and their specific locations. Dr. Bean says the American Bird Conservancy estimates that up to a billion birds die every year in the United States from colliding with windows. They soon reached out to the biology department, and several others, to find a way to make the building visible and to protect the birds.

The solution was to install WindowAlert decals on the outside surface of each three-foot-by-three-foot plate of glass on the north side of the building, Dr. Bean says. The decals reflect ultraviolet light invisible to humans but highly visible to birds, appearing almost like a stoplight. From inside the building, the decals look like little more than a frosted portion of glass.

Dr. Bean says the first decals were applied during peak migration, and that the team has continued to monitor their effectiveness. “If successful, the plan will be to continue reapplying the decals every six to nine months,” she says.

Dr. Cervantes says having a team form and tackle the problem together was a rewarding experience that exemplified the community spirit of South Texas College.

“Actually, it was the first time I felt [that] the different departments had the same interests, and more than anything, we all had different ways we thought we could address these concerns,” Dr. Cervantes adds.

For her department, the focus was on biology.

“When do the birds migrate? Why is it called a corridor? What can we do to teach students and the community to protect birds during the migration?” she elaborates. For others, it was researching the technical solutions, observing flight patterns, and more. The Department of Architectural and Engineering Design faculty will be teaching students to take all aspects into consideration when designing a structure, especially the environmental impact of the buildings.

The one common goal was protecting nature, and thanks to the passion and grit of the South Texas College community, they have found a worthwhile solution.