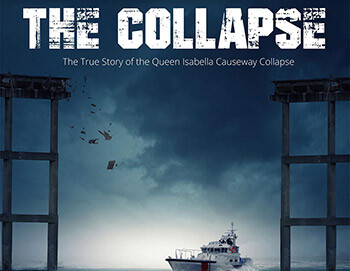 In 2001, a tow boat pushing four fully loaded barges hit a pillar of the Queen Isabella Causeway, which connects South Padre Island and Port Isabel. On that day, four fishermen saved three people, but the tragedy ultimately claimed the lives of eight individuals. During the presentation, guest speakers Joshua Moroles and Robert Espericueta will discuss how they have documented that fateful day.

Moroles is a first-time documentary creator with a background in marketing and advertising. His work on the collapse was established through a podcast, which has now evolved into a possible limited docuseries.

Espericueta is a first-time director. He was one of the fishermen who aided in rescuing the only three survivors of the collapse. His storytelling capabilities and eagerness to share this story with as many people as possible help solidify this project.

About Museum of South Texas History
The Museum of South Texas History is accredited by the American Alliance of Museums. It is located downtown Edinburg at 200 North Closner Boulevard on the Hidalgo County Courthouse square. Founded in 1967 as the Hidalgo County Historical Museum in the 1910 Hidalgo County Jail, the museum has grown over the decades through a series of expansions to occupy a full city block. In 2003, following the completion of a 22,500 square foot expansion, the museum was renamed the Museum of South Texas History to better reflect its regional scope. Today, the museum preserves and presents the borderland heritage of South Texas and Northeastern Mexico through its permanent collection and the Margaret H. McAllen Memorial Archives and exhibits spanning prehistory through the 20th century. For more information about MOSTHistory, including becoming a FRIEND, visit MOSTHistory.org, like us on Facebook and Instagram, follow on Twitter, find on YouTube or call (956 )383-6911.