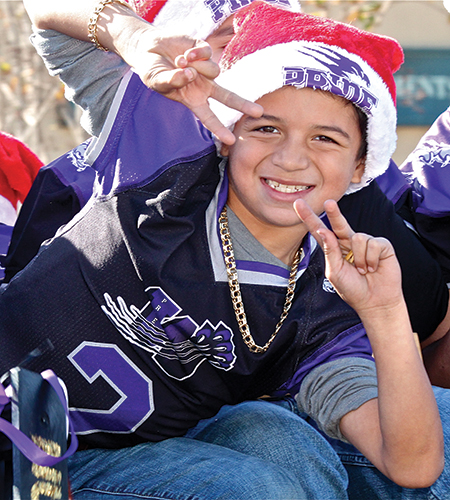 As the more than 100 entries into the Weslaco Christmas Parade began to line up in preparation for the 100th year celebration of the city, Bill and Cathy Ackermann found the perfect spot to watch the event

Seated on a corner spot, the Missouri couple, in the Valley for just their second winter, spilled the secret of finding the excellent spot.

“We got here an hour early,” Bill said. “We are looking forward to this.”

Searching out great spots and getting to destinations promptly probably was instilled in Bill (and therefore Cathy) sometime during his 21 years in the Navy, where he operated nuclear reactors on submarines.

“We love the Valley and we love our park,” Cathy said. “There are so many activities to do every day if you want to.”

Bill said he enjoys the RC races even though he hasn’t gotten fully invested with his own car. He said he might do that next year.

They were just two of the hundreds who lined the parade route last week as part of the Weslaco Centennial celebration, a multi-day celebration that honored everything Weslaco, from the Tinaco Tower to the 1015 onion and the pioneer founding families of the Mid-Valley town that has seen explosive growth over the past decade.

Floats that were community built and decorated passed one by one, carrying politicians, athletes and other well-known Weslaco natives. Among those included Brandon Figueroa, who has held the WBA super bantamweight boxing championship belt since October and previously held the WBA interim title since April 2019.

And what parade would be complete without a crew from Star Wars as people eagerly anticipate the final installment of that movie series, out this week.

Bruce Duff and his wife are from Buffalo, Missouri and were stationed right at the front of the parade route. They stay at the 1015 park and after the parade were probably going to go do something else they love while in the Valley.

“We love to go out to eat,” Bruce said. “There are so many places.”

Weslaco has a lot to offer and their parade and 100 year celebration showed that Weslaco loves their community.