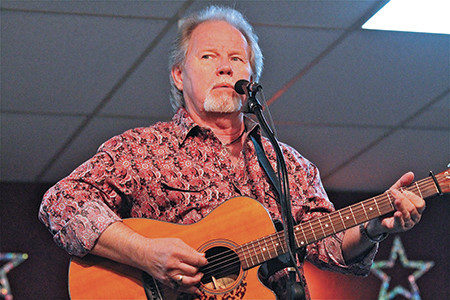 Rick McEwen is taking it easy entertaining everywhere he goes. Whether he is singing, strumming his guitar, cracking jokes, or just telling some stories from his childhood, he is sure to entertain the crowd. Rick is genuine in all he does, has fun with his work, and enjoys making people happy.

Rick is most known for his Kenny Rogers music – since people say he kind of looks like him. He also sings other artists like Elvis – which he thinks he looks like … if Elvis had lived a little longer.

Some of the other artist he performs are Waylon Jennings, George Jones and even Loretta Lynn.

Oh, and when he needs to put that twang in his voice for certain songs, he can do that too.

Rick goes into his shows with a bit of preparation, but, he said, “I take requests.” He said he knows almost everything people ask him to do and his shows tend to take longer, because he will sing until everyone is done.

He can get on any stage and after a bit of humming and warming up his guitar and fingers, he is ready to go.

“I have lots of fun at dances,” said Rick, but he really enjoys being able to work with the crowd on requests – playing what they want to hear.

He has spent most of his life, 45 years – 35 of those performing Branson music shows – entertaining folks from California to London and from Northern Canada to Mexico.

“Singing and performing has been the drive in my life.”

Having performed for 45,000 people, he says his mom is his biggest fan.

“I pray that I can sing til my last day …. God Willing,” said Rick who did have a quadruple bypass two years ago. He says he is still going as strong as he can, for as long as he can. He has celebrated 66 years of life and looks forward to many more years ahead.

Rick is still entertaining in the Valley until mid-March. He is also performing on March 10 and 17 with Brenda Coin at Mustang Lounge, from 3 to 6 p.m.