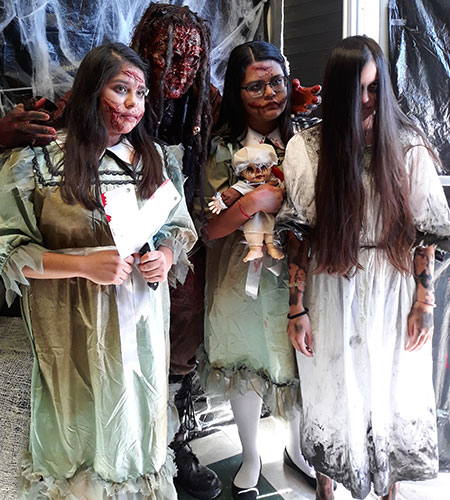 About 1,000 people were ready for a run on Saturday, Oct. 26, to benefit the Tip of Texas Family Outreach Center.

Under near perfect weather conditions in the late afternoon runners, walkers, skippers and strollers were on hand an hour before the scheduled run for a little warming up on Levee Street in Brownsville. They were getting ready to take part in either the 5K Zombie Run or the Monster Mile. There was a lot of smiles, with many of the kids made up with a Halloween look, for hundreds of pictures to be taken.

In the crowd was Nola Ortega, who was being joined by her daughter along with Karla Espinosa and her daughters Zenia and Athenez. They were all part of a running club at Villa Nueva Elementary School in Brownsville and this was a chance to get out and participate in an organized run.

Elizabeth Saldana came with a large decorated cake for a headpiece. With her were Brandon Almaguer, dressed as a marshmallow and a brother, Jason, as a big mouse. The two boys were definitely there to run.

There was even a dog by the name of Paris in a tutu that had on her outfit the word, “Boo.”

Before the start of the runs, the children, along with parents stood in long lines to receive backpacks, supplies, refreshments and snacks from community sponsors of the event. Then it was time to hit the starting line and receive the go signal. Two Brownsville police cruisers led the way with wave after wave of runners roaring quickly past the many spectators lining the curb in the first block.

At the end of the run there were treats and a haunted house to traverse. Juan Fernando Lopez, who was helping in the spook house for the second year, said, “Families come to have fun. It’s very good for the community.”

Ximena Bouchot and Juliana Mendez, juniors from Brownville Early College High School, were made up as a pair of “clever” sisters for the haunted house. Bouchot said it was their first year of helping and called it “fun putting it together.” They were among nearly 50 from the high school working the spookiness. 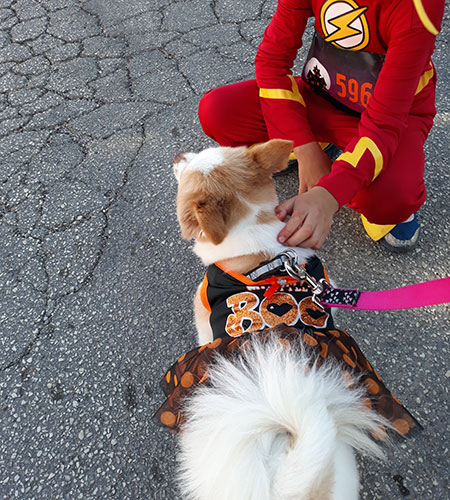 This sixth such event before Halloween is a major fundraiser for the Family Outreach Center, according to its director Alma Herrera. She said the agency, which is a partner organization with United Way of Southern Cameron County, works annually with about 300 families residing in the Brownsville area. The aim in working with parents is to try and prevent child abuse and neglect by offering an array of supportive services, such as free counseling, parenting skill classes and helping teen parents.