First hole in ones 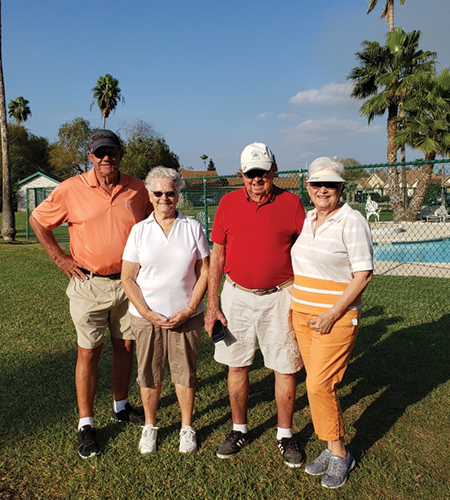 Dawn Moore gave out some simple, but direct, instructions to her golf ball recently, while playing with her Sunday scramble group at Stuart Place Country Club in Harlingen.

A resident of Sun Valley Village with her husband Phil, Dawn made it clear to her ball what its part was in playing for her that day.

“I just told the ball to go right up there and don’t dilly dally around,” she said. “I hit it and the other lady in our group (Pauline Crist) was standing beside me and she said, ‘I think it went in the hole’.”

When the group, which included Bob Dark and Gary Anderson, reached the green and looked in the cup, sure enough that golf ball listened to the commands and obeyed.

“I was pretty sure it was in the cup,” Dawn said. “I watched it land on the green and saw it roll right up there, straight and pretty.”

It was her first hole-in-one after about 10 years of playing. Her husband Phil added jokingly that he has three. It’s because of Phil that Dawn took up golf while they lived in Lake of the Ozarks in Arkansas.

“When he retired, he started playing golf and was leaving me home all the time. All of our friends golfed too,” Dawn said. “So, I decided to take it up as well.”

She was asked what club she used on the 100-yard par-3. She said it was her driver.

“He couldn’t believe I used a driver,” she said. “I’m not a long hitter. But it still went in.”

After the recent ace, she probably won’t be giving it up anytime soon either. However, with the early Christmas present came an ounce of not so great news upon returning to the clubhouse.

“When we got back, they asked if I was part of the hole-in-one club,” she said. “I wasn’t and they told me I could of won $100. I said that was ok because I probably would’ve just bought drinks for everyone in the clubhouse with it anyway.”