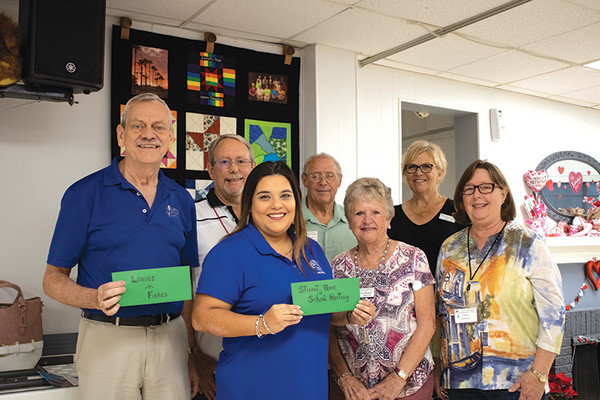 “We have done much better this year,” said Nagle.

“None of these auctions would be worth a plugged nickel if it wasn’t for you guys,” Wray told those in attendance.

“I realize you can get cheaper pie at Denny’s,” said Pedro. But it’s the cause this is going to. “I am glad that we can do this here at Palm Gardens.”

Wray presented Robert Reagan with Loaves and Fishes of Harlingen and Becky Zaller with HOST at Stuart Place Elementary with checks for $1,080.

Loaves and Fishes started as a soup kitchen, said Reagan. Churches found that the poverty level was so high that they could not address it by themselves.

The motto of Loaves and Fishes is “Help and hope for the hungry, the homeless and the hurting.”

The organization has grown to a place that offers support for the community through its several departments. They have the Bread of Life Dining Hall, Family Emergency Assistance, Great Physician Healthy Living, New Hope Job Shop, Harvest Table Food Pantry, and Open Arms Homeless Shelter. Each department does something a little different from the other to help the community’s homeless, hungry and hurting.

Reagan said their main goal is to get people out of the shelters and into their own home. They even provide help to keep people from becoming homeless.

With a recent grant, Loaves and Fishes now has two full time mental health professionals that help with mental counseling and addiction.

Last year, they served 167,000 meals in the dining hall. They currently have 45 people in their shelter.

We see a lot of people, said Reagan. At least 500 to 600 unduplicated people.

This past year they also served a lot of migrants that the Border Patrol dropped off at their facilities. In just three months’ time they saw about 2,000 people.

“It really challenged us, but we were so happy to help people that were in such dire straits.”

Becky Zaller with HOST talked about how she has been a part of the program since she became a teacher nearly 20 years ago. One of the volunteers at the park, Pat Bradley, has been assisting the program for 21 years.

Stuart Elementary is one of the only Harlingen schools to still offer the program. The program serves 35 to 40 children that are struggling readers. The children are partnered with mentors that volunteer their time to read to the children, and help the children learn to read. The mentors usually spend about 30 minutes with the children Monday through Friday. They work one-on-one with the kids.

“The best part is seeing that relationship and the connection of the child being able to communicate with someone,” said Zaller.

“The mentors make a great impact on these children.

With the donations they receive they can purchase books that the children can take home during their breaks such as Christmas, Spring Break and over the summer.
Both Zaller and Reagan were very thankful to the park for their generosity.

The park participates in a lot of fundraising, and it isn’t always money they donate. During the holidays they did a fundraiser where they collected teddy bears to give to the Harlingen Police Department. The teddy bears are used during family disturbances and such where children are in distress. The teddy bears calm the kids during what can be a transition period for them.

The park mans a station during Harlingen’s Jalapeno 100 where they provided a drink and snack for runners and walkers to help them energize during the event. The park also has volunteers in the park that help others in the park with repairs, and other things in their homes.

This past Christmas the park was able to support five families with Christmas gifts. They were even able to give bikes to three of the children.