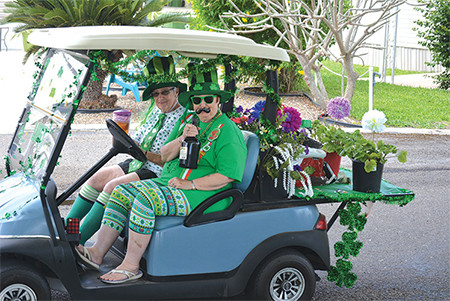 St. Paddy’s Day last week was pretty much of a bust around the nation with the coronavirus putting a damper on all the big city observances. That is except in South Texas where some St. Patrick’s Day park parades were held.

The City of Alamo had at least two, one at La Hacienda Estates and another at Royal Palms Mobile Home Park. The one at Royal Palms was smaller than last year’s, in part due to Canadian residents ordered to return home last week.

Leading off was this year’s “Winter Texan of the Year,” Joe Hummel, who rode in his homemade rickshaw with his wife, LeAnn, who come from South Dakota. They were hitched to a golf cart driven by John Mitts, with wife Donaline, who hail from Iowa. 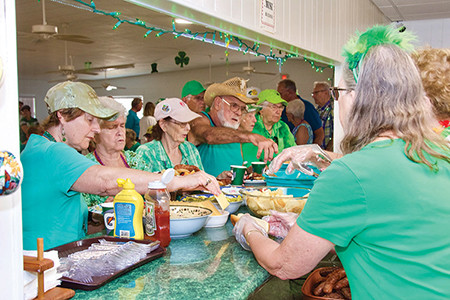 The top award entry in the Royal Palms afternoon parade, which featured golf carts, a scooter and some walkers, ended in a tie based on balloting by residents and spectators. Devona Slater and her daughter, Sandy Olafson, who both flew out the next day for Canada, had a golf cart featuring flowers and beverages, while Don Wartner, from Minnesota, rode his decorated medical scooter.

St. Patrick’s Day parades were a creation of Irish immigrants. They transformed March 17, the date of Ireland’s patron saint’s death in 461 and originally a time of religious services and feasts, into a largely secular holiday of revelry and a celebration of things Irish. Cities with large numbers of Irish staged extensive celebrations, which included elaborate parades. Boston held its first St. Patrick’s Day parade in 1737, followed later by New York City in 1762. Since 1962 Chicago has colored its downtown river green to mark the holiday. Blue was actually the traditional color, but green is now commonly connected for the “wearing of the green” holiday.

Usually corned beef and cabbage is the meal of the holiday, but the Women’s Club at Royal Palms offered a fancy potato bake supper. The club had nearly a hundred enjoying a large baked potato with all the toppings, just getting in under the wire as Hidalgo County and City of Alamo issued emergency declaration that limited gatherings to no more than 50 people.

The awards ceremony and a relay potato race followed the meal and other awards were given out for those who did best in several scrambled word games.

The musical entertainment for the event featured the Teapot Lassies playing a few Irish melodies. The sextet consisted of Mary Engle, Carrah Maney and Carrol Moering, all converted Texans, Joan Crowe, from Illinois, Cheryl Panter, from Wisconsin, and LeAnn Hummel, who coordinated all the events and social activities that day. 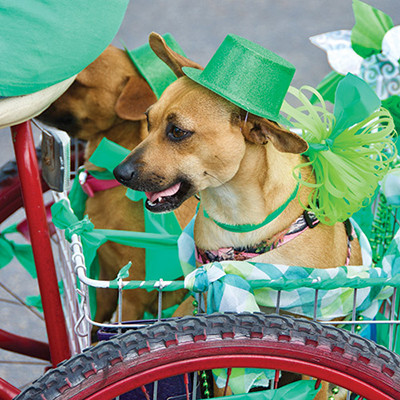 At La Hacienda Estates, Alamo Mayor Diana Martinez rode in the late morning parade, which was led by a golf cart decorated both patriotically and the usual Irish traditions, noted JoAnn Eldridge, the park’s party coordinator. This is her first season as coordinator and St. Patrick’s Day was her second party.

The parade winner, which included golf carts, bikes and few walkers, went to Ben Keith, from Kansas, with his decorated bicycle. Second place was awarded to Janet Root, from Illinois, and third place was earned by Peggy Maxwell from Kansas.

Eldridge arranged an American St. Patrick’s Day lunch of brats and burgers with Patrick Kelly and Jim Goodrie, both from Minnesota, taking on the cooking task. About 70 residents were on hand.

In between the parade and meal, a Crazy 8 golf cart time trial race was held. Dan Hartman had the fastest time on the course in his cart. All of the events were recorded in photos by Durango Mendoza, who comes from Illinois.

With all the restrictions being implemented because of the virus, most events are either being cancelled with spring just around the corner or postponed a few weeks in hope that the crisis will be winding down by then.

Eldridge reported that has meant the end of La Hacienda’s big band and country jams for the season. But, come November the jams will be back on and Eldridge will be planning her next park party, a Christmas event in December.