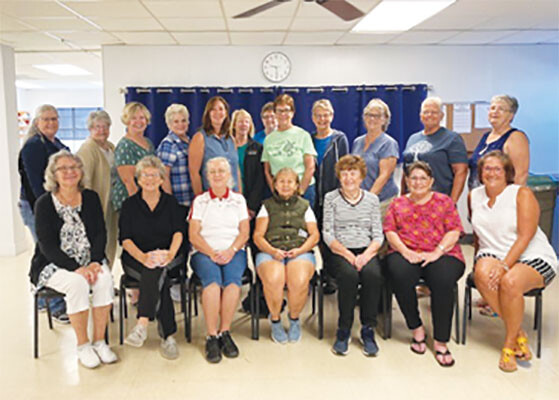 Martha Little and her husband Irv first came to Palm Gardens RV Park in Harlingen in 2008 and enjoyed the area, finally buying a place in 2010.

Martha came from a long line of quilters. Her grandmother made quilts out of sugar sacks while her mother used old clothing. Martha’s youngest daughter is also learning to quilt.
When she first came to Palm Gardens, Martha brought her sewing machine and material. During the first year she had other quilters from the park to her house for lessons. Once she had a few other people, they started quilting at the hall.

In the spring of 2010, Martha learned she had cancer and had chemo treatments, resulting in the loss of her hair. During the chemo sessions, she met other sewers and discussed making chemo caps. Her quilt guild in Port Perry, Canada obtained a couple of patterns and made several caps.

Martha lived with the cancer until her death in May 2014. During this period, she joined a cancer support group at Hearth Place in Toronto. The group provided support for the patient plus the family and is run solely on support from the public. The Port Perry Quilt Guild made several caps that were donated to Hearth Place.

After Martha died, her husband Irv approached the quilters at Palm Gardens and spoke to Sherry Polk about making caps. That year, residents made over 50 caps that were later supplied to Hearth Place. Each cap was given to a cancer patient who had lost her hair during chemo. Several of the caps made by Palm Gardens were also donated to St. Jude’s for the children cancer patients.

For the past seven years, every February Palm Gardens residents get together to make cancer caps that are given to Texas Oncology and Valley Cancer Associates in Harlingen and also send some back to Port Perry, Canada with Irv. Over the years, the group has also made and donated port pillows (provides cushion between the chemo port and the car’s seat belt). This year residents obtained patterns to also crochet and knit caps.

Thanks to Martha’s vision and the initiative she started, and to the residents of Palm Gardens who cut and sewed caps and port pillows, who crocheted and knitted caps, and who provided monetary donations, we are happy to donate to Texas Oncology and Valley Cancer Associates in Harlingen and to Port Perry in Canada. This year’s donations were 186 tee-shirt material caps, 86 cotton material caps, 250 crochet or knit caps, and 125 port pillows.