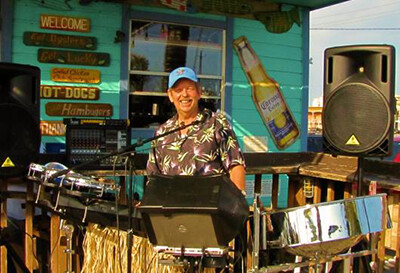 The Castaway is Dennis Craswell, an Original Castaway, known for being a million-dollar seller of the famous song “Liar, Liar.” He currently plays solo with occasional guests. He plays in Minnesota during the summer and most of his winter is spent playing on South Padre Island and all around the Rio Grande Valley. He and Rich are currently regulars on Wednesday and Thursday afternoons at Laguna Bob.

Dennis is a former member of the bands The Castaways and Crow. He has six Rock ‘N Roll and Country Hall of Fame awards. The Castaway was named Best Novelty of Comedy Act of the Year in the 2020 Valley Star Awards (voted on by Winter Texans). Dennis plays keyboards, drums, stee drum, harmonica, and vocals. He has recorded two top billboard hits. He has played at venues that included Sonny & Cher and the Beach boys, among others.