11th Annual Valley Star Awards was one to remember 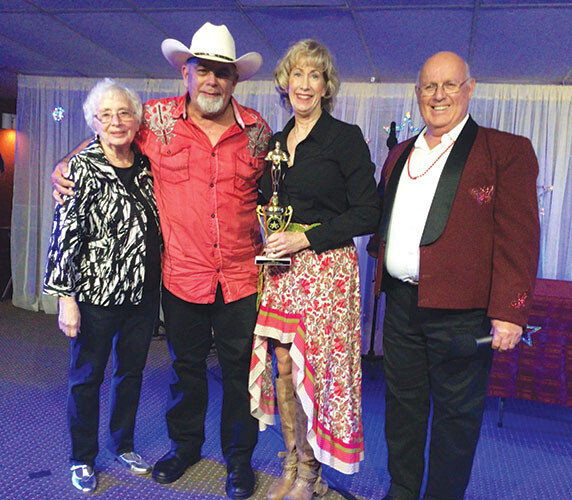 Long-time favorites, soon-to-be favorites and an extremely wide variety of Wintertainers made the 11th annual Valley Star Awards at Mission Bell RV Park one that raised the bar for future events. If you didn’t get the chance to attend and see the entertainment – Johnathan Len, Justin Terry, Mountain Highway, Ron and Jan Easter, Rebecca and Jaime Bagwell, and Curt James – you should make a point to catch them somewhere.

In the end, Helen Russell & Company (“I’m, ‘And Company’,” her husband of 39 years, Elvis, said jokingly) were the big winners. They not only were named the “Best Small Band Variety Act” but also “Entertainers of the Year,” by Winter Texan voters across the Rio Grande Valley.

From Osage Beach, Missouri, the duo has had a long-time award-winning show, bringing live music, “scalding piano, hot licks on the banjo, jumpin' bass guitar and drums.” They perform country, bluegrass, rockabilly, classic rock from the 50s to the 80s and more. Their variety doesn’t stop there, including audience participation, comedy, and impersonations of entertainers such as Dolly Parton, Cher, Loretta Lynn, Tammy Wynette, Waylon Jennings, Willie Nelson and more.

This is the second time the duo, married for 43 years, and who began entertaining in the 80s, have won “Entertainers of the Year”, and fourth time named “Best Small Band Variety Act”.

“First of all, we concentrate on being entertainers. We aren’t the finest or most polished musicians, but entertainment is our No. 1 thing,” Russell said. “We try to connect with the people and change our show to have new content every year. If they come back time after time, they don’t want to hear the same thing, so we work hard to come up with new material and feel it’s worth it.

“We just enjoy the people and what we do. If it gets to the point you don’t enjoy it or dread it, don’t do it. We still love what we do.”

For the second time in the past three events, Rusty Rierson was named Male Vocalist of the Year. Rierson’s vocals, personality and comedy within the show made him an immediate hit when he first arrived. Obviously, he still is.

“The really meaningful thing about the Valley Star Awards is that it’s a people’s choice award,” he said. “There are no judges with natural biases and prejudices. It’s left up to the fans to choose. That means my fans really appreciate what I do. And that is a very fulfilling thing for me.”

Robert and Billie Ferguson, names synonymous with Winter Texans and Wintertainers alike, received the prestigious Heritage Award, given out only three times prior. The award is given in appreciation for the outstanding contribution to Winter Texas entertainment and the Fergusons have given their all, moving to the Valley 17 years ago, starting the Winter Texan Showcase in 2006, growing it to two showcases (from 15 to 66 entertainers) and, as Robert said, “we have met every entertainer to come to the RGV in the past 15 years.”

This is their final year in the Valley, heading back to Tennessee in April. There, Robert will teach and call square dancing, something he did before he moved to the Valley and while here. Billie said she will more than likely be the treasurer for the Tennessee State Square Dancing Convention. They aren’t slowing down, just transitioning. They have been tour directors, activity directors and an integral part of entertainment in the Valley throughout their time.

“It was wonderful and really special to receive that,” Billie said. “We didn’t expect it and it was such a nice gesture they did. It made us feel really good.”

The complete list of winners for the 11th annual Valley Star Awards are below: