Halloween and the spirit of Winter Texans 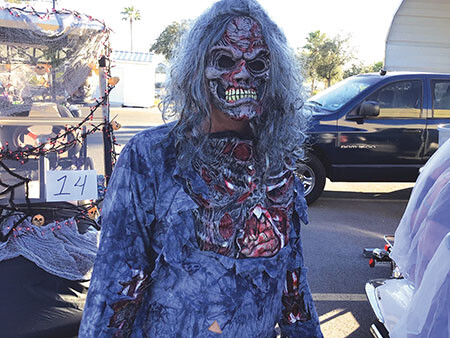 Ghouls, goblins and ghosts – and a whole bunch more – didn't wait for the stillness of night to make their scary presence seen and heard around Texas Trails RV Park in Pharr.

But instead of screams of terror, these creepy images brought a resounding sigh of relief – and plenty of laughter (and candy) to go with good camaraderie. Sure, it was Halloween, but it was also an opportunity to take a step toward some normalcy amid a year where the COVID-19 pandemic has altered so many lives and the way they are lived. And what says normalcy among Winter Texans more than dressing up as zombies, witches and whatnots? 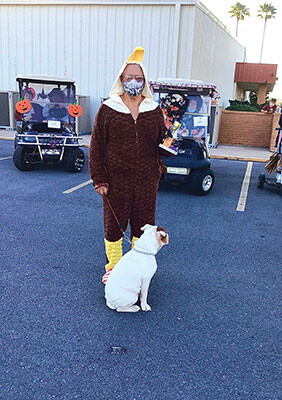 “It's a bunch of folks having fun,” said Lou Dewaele who, along with his wife Cathy, are activity directors for the park. “Normally, we do a costume contest and dance but since we're not having dances we thought, 'What about a decorated cart, Halloween parade and costume contest?' It's not a bad turnout.”

Some of the nearly 300 residents who have already returned – or never left - kicked off the beginning of the holiday season and celebrated Halloween with a golf cart, moped and electric scooter parade around Texas Trails. Those who were not in all of their spookiness sat in their driveways and waited to see the caravan make its way through the park. There were more than 20 golf carts and other transporters taking part in the event – oddly enough, no brooms could be seen carrying their witches through the beautiful early evening air.

Ghouls tossed candy to those around the park waiting to see the haunted parade. Judges waited at trick or treat stations throughout as the group made their way around before returning to the start.

Stan and Brenda Noakes won first place, followed by Cheryl and Doug Shneider and Danny Short, with his bulldog.

Christy Myers, of Duvall, Washington sat in her driveway with her husband, brother, mother and sister awaiting the traveling horror-on-wheels group. 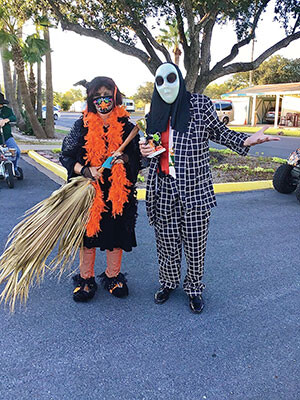 “I love it,” said Myers, who moved to the Valley in March. “I'm really glad to be here and we just group together, go to the pool and that's about it. We do a lot of cooking. We love the freaky people.”

Michael Allred was one of those freaky people, dressed “to the nines,” in his zombie outfit. He and his wife clearly were enjoying the opportunity to be around – with social distancing – other park residents and friends.

“We just love this,” said Allred, an Arkansas native who has lived full time in the Valley for the past two and a half years. “We have parades constantly for Christmas, Halloween, Easter and with COVID going on, having something like this is just so much fun. It's affected everyone. There are no dances and, for example, for Thanksgiving we would all sit in the hall all together and eat, but now you order dinner and come pick it up.”

But, as is the spirit of Winter Texans, there's always a way to find a good time.

“We're gonna be doing a drive-in theater,” he said. “We'll be in golf carts and socially distance as best we can, but they're always trying to be innovative and come up with new ideas here. It's great.”

The walking dead, ghosts, skeletons and a great time – what better way than to say Winter Texans have returned?