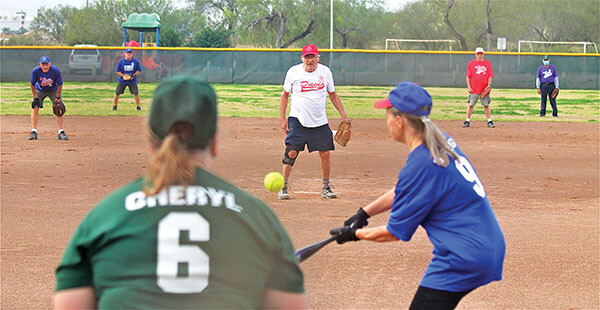 Patrick Neel heard all the motivation he needed as he rounded the bases.

“Run faster, run faster,” the frantic voice of his wife Darlene echoed from the stands.

“I'm running as fast as I can,” Neel laughed.

In the end, Neel went into the scorebook as hitting a grand slam. It was during the Winter Texans U.S. versus Canada game that signals the end of the Winter Texan softball season.

Due to the COVID-19 pandemic, however, there probably will not be any such game this season. But that has not stopped the Winter Texans from showing up at the McAllen softball fields on Ware Road four days a week to hit, run and catch some balls. On Tuesdays and Thursdays, it is the “A” league, the heavy competitors. On Mondays and Wednesdays, it is the “B” league. 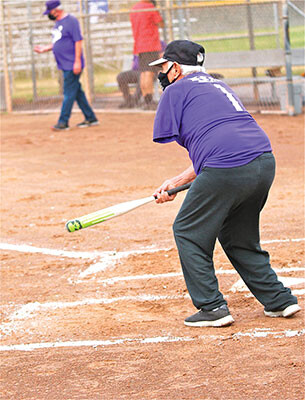 “It's more like a recreational league,” said Ed Martens, the man who is the face of Winter Texan softball. “The emphasis is on fun.”

“We don't get mad, we don't get angry,” said Neel, who has lived in Bentsen Grove Park in Mission with his wife since 2013. “We have fun here. We like to win, but if you don't, it's no big deal. We're here for the camaraderie and to have a good time. We love the sport and we're out there playing, exercising, and having fun.”

Neel, a lifetime Chicago Cubs fan, plays third base, which means he has a big gun for an arm. He agreed, somewhat.

Sam Ferguson, who is from the outskirts of Columbia, Mo. and lives with his wife June in Split Rail RV Park in Mission said he discovered the softball league while looking for a place to live.

Like every other Winter Texan who seemingly has ever played softball in the Rio Grande Valley, Ferguson called on Martens.

“He said come on, just show up. This is my seventh year here and seventh playing ball,” said Ferguson, a Cardinals fan who jokingly didn't have anything great to say about fellow baller Neel. “Yeah, so they've won a few games finally.” The Cubs and the Cardinals are long time bitter rivals.

Ferguson was a four-year letter-winner on his high school baseball team and then played two years in college before he entered the U.S. Navy. 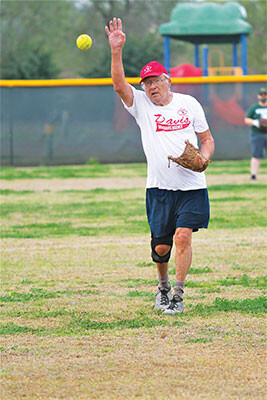 “Then I played some town team baseball and drove all over the place,” he said. “Then started playing softball with the church team after I realized I couldn't play with these younger guys anymore. I was rounding second base once and pulled two muscles in one leg at the same time. Then I never really picked up a ball other than to play catch with my son.

Close to 25 men and women, some in their mid-80s and still running the bases, enjoyed the low 70s and overcast morning. Something they more than likely would not be doing in their hometowns up north.

Shereen Hill did not play sports in schools but picked up playing softball for a couple of years in a church women's league back home in Duluth, Minn. She and her husband first bought a home when they decided to live Winter Texan style, then realized they would find more to do and people to do it with in a park, so they sold the home and moved into Trophy Gardens in Alamo.

“We needed to find things and to meet people,” said Hill, who added she usually plays catcher and has not had any Pete Rose style collisions at the plate thus far. “I've been doing ok and holding my own. Back then if I look back, I was probably terrible. I think I'm better now.”

Good or bad, fast or slow, it's clear that they're all having a good time.

“Come out and look us over,” Martens said. “Everyone is welcome.”

Martens should know – he has welcomed everyone.