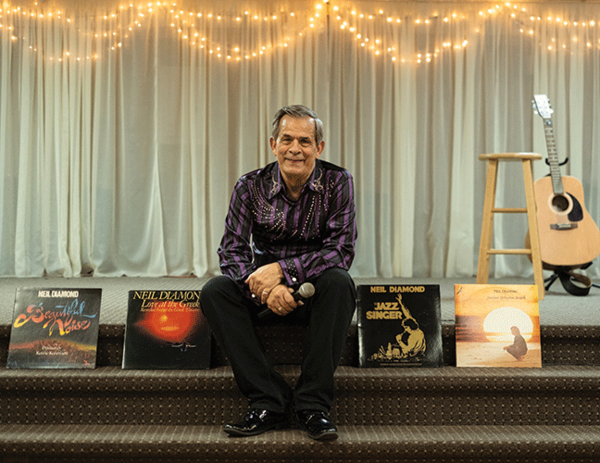 For those who loved the music of Neal Diamond during their youth, singer Ralph Kuster has put together a show featuring the best of Diamond’s music from his many albums such as “Cracklin’ Rosie,” which tells the story of two fellows sharing bottle of a cheap wine and lamenting their lost loves. 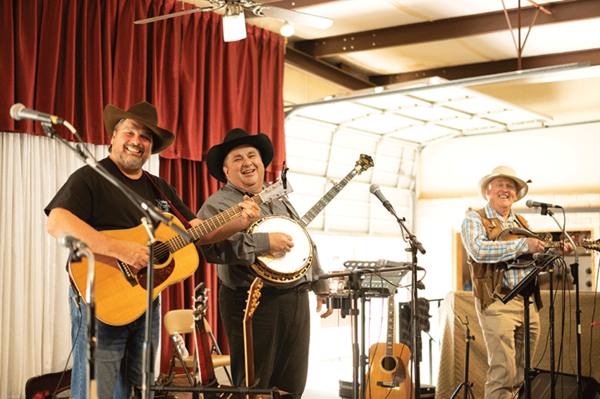 For the first time since covid hit the Valley, the very popular group, Goldwing Express has returned to perform. The group consists of Irishman, Bobby Baldridge, who was referred to in the show as Pop, or, “white man,” and two of his three Indian sons, Steven and Paul, who towered over him. Shawn, a former favorite with crowds, was unable to come. 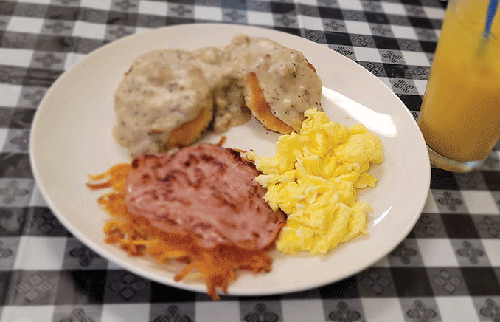 After looking at the menu, talking with the owners, and hearing feedback about their grand opening, my husband and I were more than ready to visit Biscuits & Gravy Neighborhood Kitchen. After all the built-up anticipation, we were left more than pleased with our visit and meals as they exceeded all expectations.
Upon arriving and while waiting for our meals to arrive, we were each given a sample of their signature dish – biscuits and gravy. It was exactly like grandmother used to make – or dare I say, even better.

Something we both noticed was the toasted biscuit. Not overdone or too crisp, but as we talked to each other about it, and to Manager Ryan Martinez, it made complete sense. They toast the biscuits for just a minute to add a slight crisp to it. It makes it so the biscuit holds up to the gravy, allowing you to enjoy the flavors of the gravy and the biscuit – and not end up with a mushy mess by the time you get through your plate. This is something I have never been able to pull off when I make them. It made the meal more pleasant and the flavors more enjoyable.

The gravy has a nice consistency, peppered just right, and just the right amount of sausage. Nothing was starchy and everything was seasoned perfectly. All in all, it left me wanting more, but I was also eager to try something different on the menu.

You could tell they had a good grill in their kitchen – and a good cook. Everything had that nice crisp outside and warm and tender on the inside. Everything tastes like good southern home cooking. To me, it was reminiscent of being back on my grandparents’ farm eating a good, hearty country breakfast after tending to some outside chores.

It’s a place I will be going back to again – even if it’s just for biscuits and gravy.

Biscuits & Gravy Neighborhood Kitchen is a family owned and operated local restaurant located at the Val Verde Flea Market at 935 Bus. 83, Suite 9 in Donna and is open seven days a week from 7 a.m. until 2 p.m. 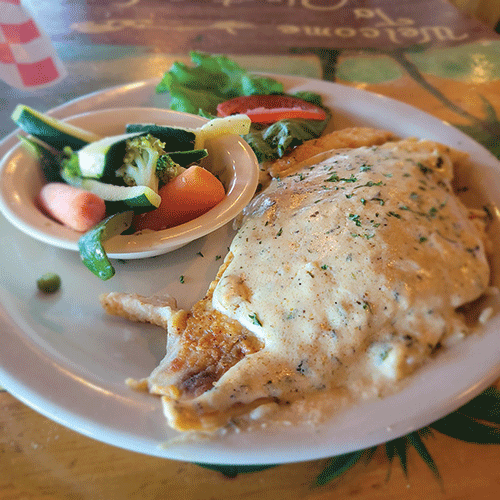 The day started out overcast and threatening rain, but a cloudy day on the Laguna Madre is better than a sunny day in the office. By the time I pulled up for lunch at Pirate’s Landing at the foot of the causeway, the sun had just burst free of the gray and dreary morning. A good omen of what was ahead?

While it is still early in the season, I could pick out several tables with Winter Texans sitting down to their lunches in a very busy dining room – and it wasn’t quite noon yet. Even with the amount of traffic the staff was very attentive, and dishes were steadily streaming from the kitchen.

The Chamberlins and Southern Express 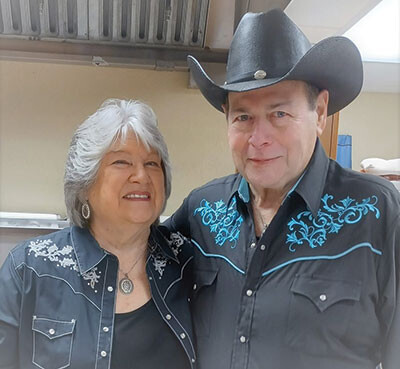 Playing a variety of Classic Country and Rock n’ Roll, as well as Gospel music for your listening or dancing enjoyment.

This five-piece group features Mary Chamberlin on lead vocals, Doug Chamberlin on rhythm, Dan Steele on lead, Jim Hanson on Bass/Keyboard, and Mike Peterson on drums. And with each also lending their vocal talents you have a group that can’t be beat. 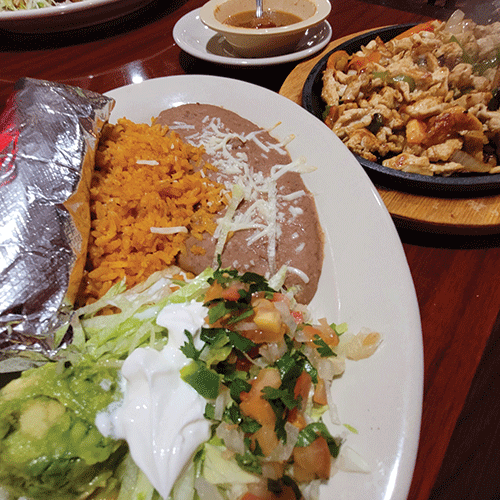 It’s the little things at Los Compadres that set it apart from the rest.

The service was exceptional. The waitress was very attentive, periodically making sure we had everything we needed. Everything was fresh and hot.

The atmosphere of Los Compadres really sets itself apart from other Mexican restaurants I have visited. We loved the décor, the decorative columns, and the ambience.

We were served chips and salsa upfront and were also asked if we wanted a bowl of charro beans – something that every guest receives. The salsa was served in a little carafe and we each got our own little bowls. The charro beans were easily one of the best I’ve had – well seasoned with a hint of spice. 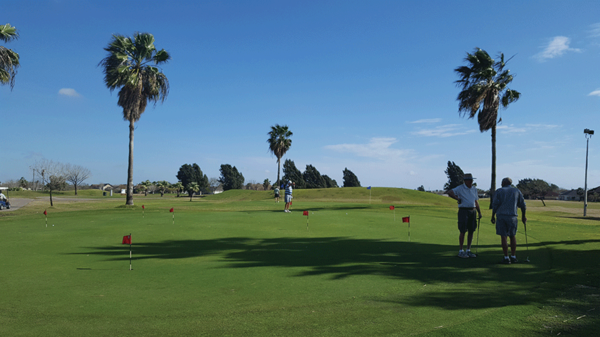 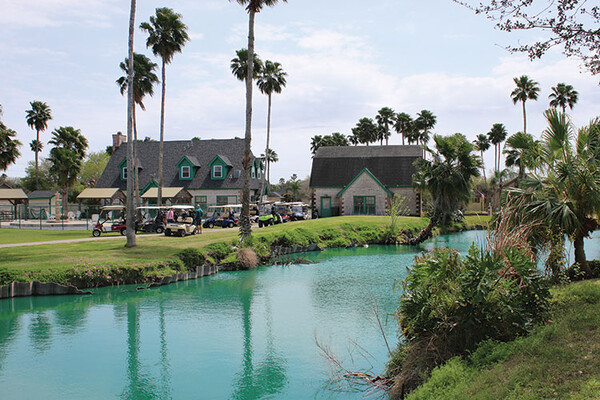 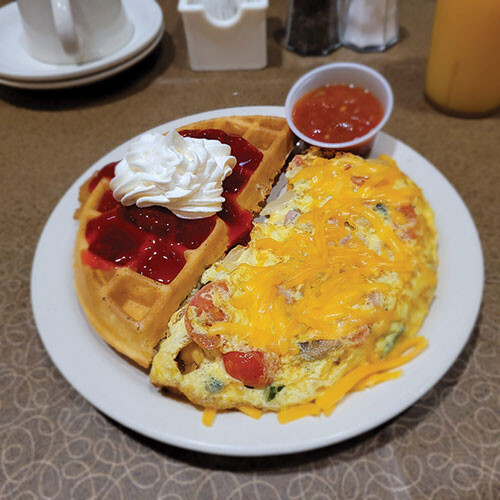 We found ourselves pulling up to Victoria Palms Restaurant early Thursday morning and were the first to arrive. Friendly greetings and a hearty “Welcome!” from Dave as he put the final touches on his omelet station made the spacious ballroom feel much cozier and welcoming.

As we considered the menu, the regular crowd shuffled in with staff greeting each by name. One stood out as she walked by with barely a word. Greeted just as warmly she was informed that her coffee was at her table -- her gratitude evident as she made a beeline for her seat. The whole scene evoked memories of “Cheers”.

Many of those coming in enjoyed a hot cup of coffee and ordered the special. I opted to indulge and ordered Dave’s Special; a 2-egg omelet with choice of 3 ingredients, served with a half waffle with choice of strawberry or pineapple topping and whipped cream; adding hash browns, bacon, and orange juice.

Over the years we have enjoyed more than a few of Dave’s omelets and every time we come away knowing that you’ll be hard pressed to find better.