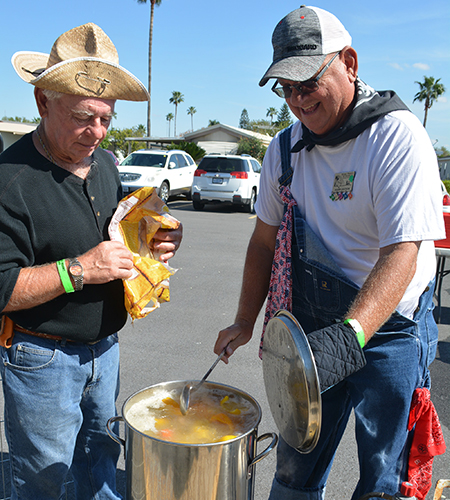 A hundred people went hog wild at a dinner and dance Saturday afternoon, Nov. 16, at the Texas Trails RV Resort.

This first such event, open to the public, at the resort in Pharr had customers bellying up to one of the two hog troughs outside Friendship Hall for some shredded pork loin, beef roast and sausage, along with steamed potatoes, cabbage, carrots, corn on the cob, a homemade roll and a cookie for dessert.

Dave Cole, who headed the cooking committee, said they lit up four kettles outside the hall to prepare the foods. When ready the foods were dumped into two long troughs with lines forming before each of them. He added that several women in the park prepared the vegetables for cooking the previous day.

Cole might be considered a veteran of the hog trough, frequently holding one of those affairs at his place in the park for 30 or 40 people. So, it seemed natural to park activity director Lou Dewaele to see about expanding the hog trough to include more people. They had a trial run of it this summer on the Fourth of July, with some 80 people. This time they opened it up to the public.

While the cooking was outside, the consumption was inside, along with what was to have been a street dance. Dewaele said the change was due to some concern about the weather, although it became a very pleasant, sunny day.

Once lunch was over the scene shifted to the dance floor and the Barbed Wire Band, which was fine with Jim McCubbins and his partner Carol Jarvis. The couple had come from their place at Alamo Recreational Vehicle Park for the meal, but especially for the dancing. These Winter Texans have been coming from Missouri for 10 years and dance away the season, averaging at least five nights a week.

Besides frequenting Texas Trails and their own park in Alamo, the couple also go regularly to Winter Ranch, Mission Bell and Victoria Palms for dancing. McCubbins said they love to dance and especially enjoy the country music.

In January every Tuesday and Sunday there’s entertainment he noted, including plans in the making for a “Ladies Only Night.” The first weekend in February, the schedule calls for a Super Bowl party at the park on Owassa Road.

Is seems likely the hog trough is going to remain a popular draw, based on the smiles and comments expressed by those digging into the food.